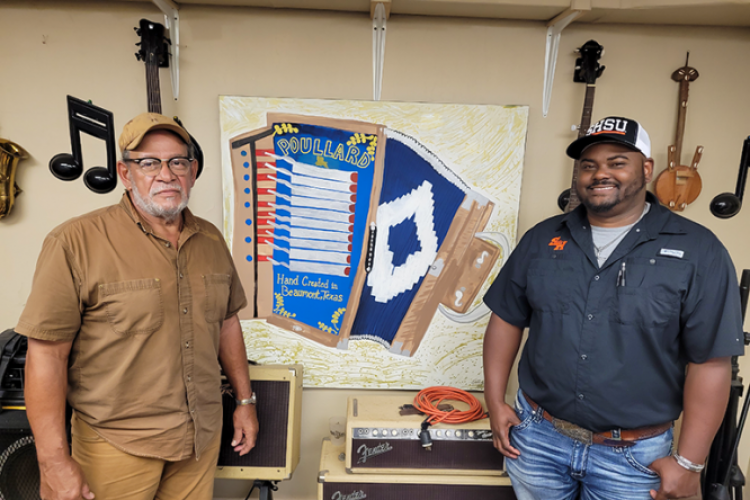 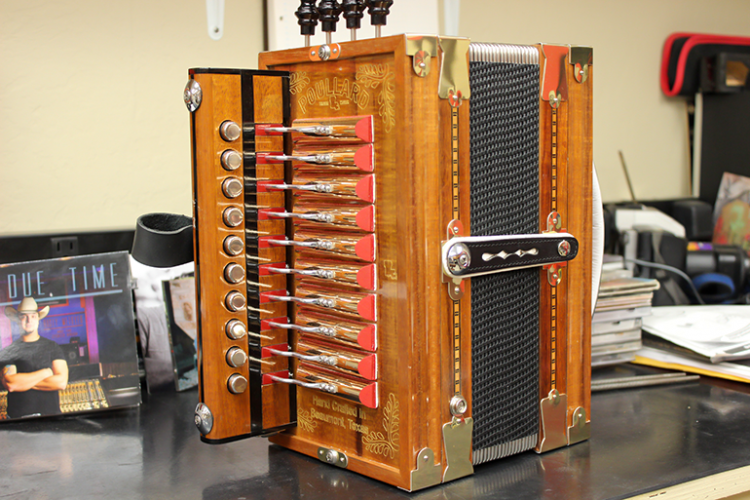 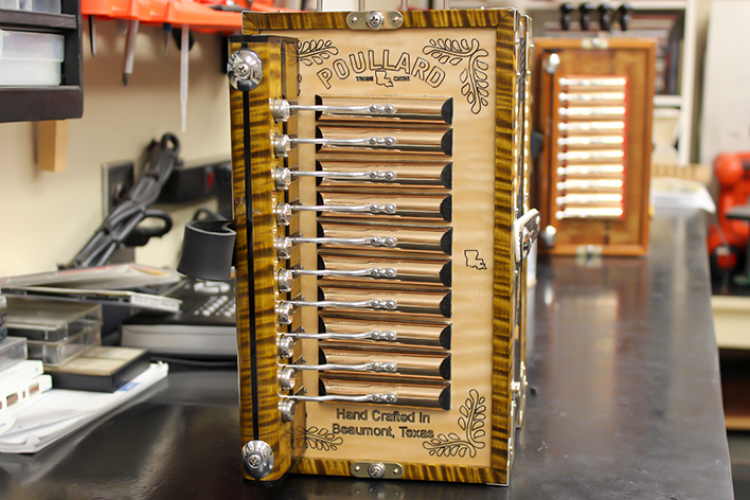 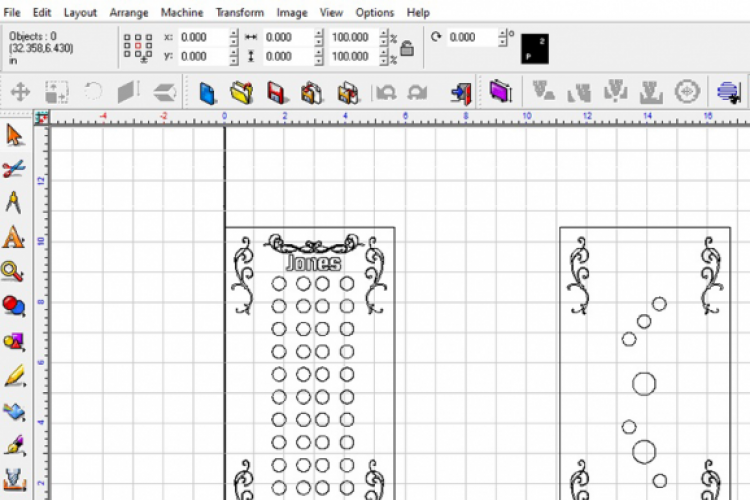 Ed Poullard could be forgiven if he only played blues on the accordion, an instrument he builds in his backyard shop in Beaumont. Poullard has faced life problems that would make Bobby "Blue" Bland shout "Oh my Lord."

In 2020, Poullard's routine trip to the cardiologist ended with doctors refusing to let him leave the office. He was rushed to the hospital for emergency heart surgery

The real-life blues forced Poullard to reorganize his priorities.

"Music had always been no. 1, not officially, but in a manner of speaking, it had," said Poullard, born in 1952 in Eunice, LA. "Now that slid down a notch, because there are other things like health, first of all, and family that are a hell of a lot more important than music, especially now."

"I'm not quitting music. I'm going to continue to play as long as I live. It's just not way up on the priority list, as much as it was."

Poullard's partial retirement from the stage has only enlarged his status as a pioneer in Creole and Cajun music of southwest Louisiana and southeast Texas. For decades, Poullard became world-renowned as one of the few Black fiddlers playing "La La," the traditional Creole, house party music that laid the foundation for the modern zydeco.

An apprentice of Creole legend Canary Fontenot and 2018 Texas Master Fiddler Honoree, Poullard has shared the stage and studio with Lawrence Ardoin, Preston Frank, Jesse Lege and other icons of Creole Cajun music.

Poullard now reigns as the first Creole accordion builder in a cottage industry of about two dozen Cajun craftsmen. He's made 65 of his "Poullard" brand squeezeboxes and works a backlog of orders that could take two years to fulfill.

Poullard is guiding Jones through the 600 pieces and 100 hours of labor needed to build just one accordion. A pile of buttons, bellows and wood blocks is starting to look like two accordions, the first of Jones's young career.

But months of tedious, painstaking work were needed to get here. The journey started with trips to local wood stores, which Jones said almost resulted in "a nervous breakdown."

"I was like, I'm having a panic attack, anxiety and calling Mr. Poullard, 'Where do I start?'," said Jones. "He starts telling me about this wood. I go to this warehouse and there's wood everywhere. This stuff is just rough cut. Where do I start? How much is this? The guy was like, '$100 a board foot.' What does that look like? It was like this long. I was like no, that ain't going to work."

After Jones found the right wood, Poullard had him spend hours gluing blocks together and drilling holes. The tasks sound mundane, but are key factors in the overall durability and airflow of accordions.

"What was really critical for me and nerve wracking, I don't know if it was just the actual task itself or what he told me - that was drilling those 40 holes," said Jones. "We drilled those 40 holes before I sent it off to the engraver. He told me, 'If I mess this up, but he didn't say 'mess up', you might as well pack your things, get in your truck and go home.' Imagine having that in your head and you're standing there at a drill press, no pressure at all, right? Ice cold water in my veins, right? No."

"Standing at a drill press, it's very hot in there. I'm drilling these 40 holes. Mind you, I already messed up two keyboards prior to this with this drill press. I've been drilling holes for a long time with metal... ([I'm thinking] Anybody can do this. I drilled holes in a big piece of steel, where I had to put a big pin in, as big as my arm. This is nothing."

"I drill and it gets off. I came to him and, this is on the keyboard, those I got correct, real quick. There was so much we had to get through the process just to drill the 40 holes."

Jones' determination impressed Poullard, who wanted to make sure that the apprentice was serious about learning the craft.

"Craig jumped on it," said Poullard. "Then the initiative he took after we got going - looking for wood. When we started discussing engraving, I knew of some resources that I used before. I do my own engraving here. He designed his own faceplate and found a local engraver in Houston to do exactly what these people in Louisiana are doing. He did it all on his own. We talked about it and he got advice on how to set it up."

Jones smiles broadly when he eyes the wood pieces, including panels carrying his "Jones" trademark and "Texas Made" logo, coming together into an accordion.

"Going from a raw piece of wood, from all that I have out there, to this, it's amazing to see that. It's the same look I see on my students when they're finally getting the welding. I'll put them on a little project to build something and the look in their eyes will say, 'Wow. Here I am learning how to do a bead, and here I've just built this project.' It's just amazing to see that. It makes me more eager to even come out more, I'm like Mr. Poullard, 'Hey, I can come out tomorrow.' I'll literally drop everything to come out and work on it."

Jones' self-made instruments will add to his collection of 15 accordions, instruments that he started playing at the age of 13. He grew up listening to zydeco on the radio and at Easter Sunday rodeos that his family attended.

His first accordion was a cheap, Chinese import, which sparked his interest to learn more.

"My passion is more for the craftsmanship that goes into these things. That's what made me want to collect even more. It's just hand-built and man, these things are so beautiful and they make such a beautiful sound."

"I guess also, growing up, coming from a single household, my mom was an elementary school teacher. She couldn't afford them. They're really expensive. The first hand-built one I have, at this time, was $1,200. Since then, they went up. They doubled the price now."

"I always wanted another one. She was like, 'Well, you know we can't do that.' I've always been intrigued by how it works. I think I took one apart that needed repairing and I tried to fix it myself. I think I was 12 or 13, with the Chinese build. I fixed it. It might bit have been to professional standards. But I got it back playing again."

Poullard shares similar childhood memories that have fueled his accordion fire. His father John was a well-known accordion master who, in a case of mistaken identity, was shot after playing a dance.

Twenty years passed before his father picked up the instrument again. Poullard was a little bot the day his father came home with a box that contained a German-made, Hohner accordion.

"They used to go to town every Saturday, get stuff, stuff for the kids, clothes and all that. When he came back, brought that little box in the living room, put it on the sofa. Put his hat and all that stuff up. Came back, opened that little box. Took that little accordion out. Started playing his ass off like he had never stopped."

"I couldn't believe it. That was my first exposure to that music. I was a little boy. I thought that was pretty cool, watching him play like that. I ain't never seen nothing like that before."

As an accordion builder, Poullard is part of a landscape that has seen pioneers, like Marc Savoy, age into their 80s. Some, like Randy Falcon, have passed away. Their descendants, and other younger musicians, had shown little interest in continuing their work.

But Poullard is encouraged about their change of heart.

"There are a lot more people showing interest in the craft. It comes along in phases. They'll be a whole pile of them wanting to learn at a time. Then there won't be nobody for a long, long time. Give these guys over here a chance to mature and be seasoned, so to speak, to become the true masters as the years go by."

"Then they'll have another wave like that. It's not consistent, steady, somebody jump on board all the time. But it is steady. I think it's got a pretty good future ahead, especially when the only other alternative is get them from out of the country - either Canada or Europe. They got a food thing here because they're selling to both Canada and Europe."

Jones is part of a youth movement that prefers hip hop and R&B in its 21st Century zydeco, instead of the waltzes and Creole lyrics of Poullard's generation. Jones is OK with growing the musical tree, but asks his contemporaries not to forget the roots.

"I always say, 'You gotta know where you been to know where you're going.' So don't kick that old stuff, or the more traditional stuff. You need to keep that in your repertoire. Not only for yourself, but for your audience."

"You're going to still play for the traditionalists. They want to hear those songs. The 'Oh Bye Bye,' 'Watch That Dog,' 'Boogaloo' and 'Zydeco Sont Pas Sale'.' If you don't know those songs, for the younger generation that wants to come up and play... Corey Arceneaux said it best. He ran down the songs. He said, 'If you don't know those on the accordion, you might want to go back to the drawing board.'"

"Because those songs are guaranteed to make the people dance and get pit on the dance floor. If you don't know those, you need to learn them."

Jones is honored that accordions that he and Poullard are crafting will keep a new generation dancing to Creole music and culture.

"Mr. Poullard is the only Black Creole builder there is. He's the only one and it's an honor to learn from him. For me, right now, I'm enjoying the experience. To me, he's a living legend. I'll cherish these days for the rest of my life."

"I'd like to build maybe one or two a year," added Jones. "If I do sell it, I'd probably pre-build and whoever's interested in buying it, they can buy it. I'm not going to do any custom work. It's a lot of work involved. In my eyes, I really appreciate the price. I see why it's so expensive because it's a lot that's into it. When reeds go up in price and wood is going up in price, you have to go up on the price. You'll see it and really appreciate it."

Herman Fuselier is a writer and broadcaster living in Opelousas, La. His Zydeco Stomp radio show airs noon to 3 p.m. Central time Saturdays on www.krvs.org. Contact him at hjfuselier@gmail.com.