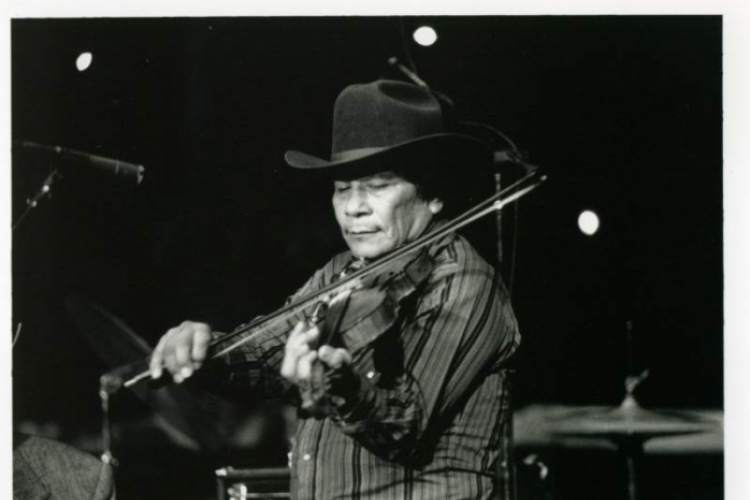 Jose Moreno, or Don Jose as he is known to many, is a keeper of an almost extinct U.S.-Mexico border musical tradition.   For decades he was one of the rare musicians to perform border region string band music featuring traditional Mexican and border songs on fiddle, accompanied by bajo sexto, tololoche or upright bass, and, particularly in his earlier days, mandolin.

Born in 1930 in the state of Coahuila, he learned how to play a home-made fiddle at the age of eight to perform with a local group of matachines, indigenous dancers who perform in religious ceremonies, often dancing for the Virgin Mary on masses celebrating her feast day.  There he quickly learned the lifestyle of a musician, performing at these feasts that lasted 24 hours at a time.

He made his way to the Rio Grande Valley as a young man where he first settled in the Mexican city of Reynosa, Tamaulipas, and later in San Benito, Texas.  There he continued a prolific recording career first on fiddle with singing partner Herminia on vocals and mandolin.  Don Jose also mastered the accordion and recorded with Charro Records, RyN Records (owned by conjunto Norteño great Ramiro Cavazos), Triple E, and Santiago Jimenez Jr.’s Chief label.  He taught accordion and violin at the Narciso Martinez Cultural Arts Center in San Benito.

From there Moreno was launched into the national cultural stage when he was discovered by Arhoolie Records and recorded an album accompanied by Amado Banda on bajo sexto and Mark Rubin on upright bass.  From there he was invited to perform at many folklife festivals including some performances at Wolf Trap Park in Virginia and Blackpot Festival in Louisiana.  In Texas he has been a featured performer at many Texas Folklife programs, including Fiddle Fete alongside Johnny Gimble, Brian Marshall, Alvin Crow, and Valerio Longoria.

For the last two decades Moreno partnered with Rigo Garza of San Benito to perform and record as “Los Patrulleros del Valle.”  Garza, a talented bajo sexto player, passed away earlier this year.  At his 85 years of age Don Jose no longer plays violin due to arthritis, but he continues to be an invaluable repository of traditional Mexican songs which he taught to his young apprentice, and Rigo Garza’s grandson, Seth Lara.

Moreno’s legacy is to have helped preserve a tradition of the borderlands of the turn of the 18th and 19th centuries.  Before accordion became king in south Texas and northern Mexico, the fiddle was the central instrument in the region.  By recording this music and passing it on to at least one dedicated young person, Moreno ensures at least some semblance of the music remains for the future.

Don Jose Moreno is one of the featured artist on the original Texas Folklife production, "Traditional Music of Texas: Fiddle Music from the Texas Folklife Archives" CD.