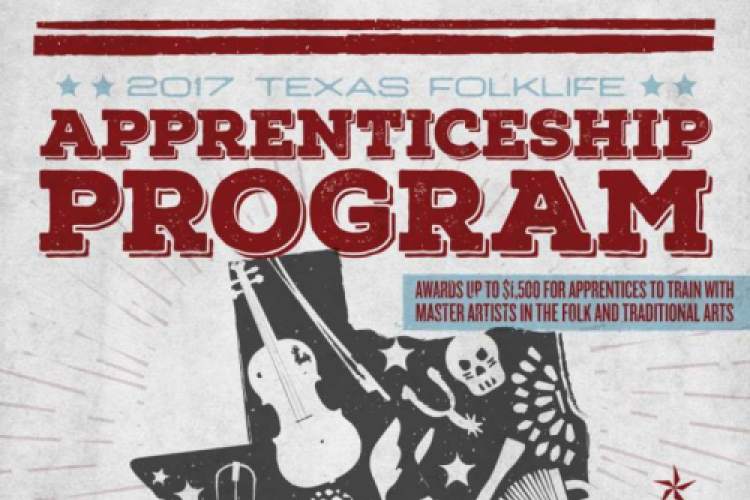 Awards of up to $1,500 for Apprentices to train with Master Artists in the Folk and Traditional Arts of Texas

Austin, Texas – January 4, 2017 – Texas Folklife is pleased to announce this year’s awardees for the “Apprenticeships in the Folk & Traditional Arts” program. The Apprenticeship Program encourages the continuation of traditional arts in Texas by providing awards to master artists to train apprentices. The awards will compensate the master artist for his or her time and training; a specified amount may also be used to help offset the costs of travel and supplies.

Apprentices were selected by an application process and vetted through a panel of folklorists, arts administrators, and former Apprenticeship Program participating artists. Twelve pairs of master artist and apprentices in a variety of disciplines were chosen. The awardees are:

Master Abou Sylla and apprentice Raymond Johnson in the art of West African djembe and balafon;

Master Ed Poullard and apprentice Randy Cagle in the art of the Creole fiddle;

Master Ernie Haynes and apprentice Danny Phillips in the art of Gospel and the blues;

Master Evelio Flores and apprentice Sarah Moreno in the art of Danza Aztecs;

Master Jesse Lege and apprentice Charles Thibodeaux in the art of Cajun accordion;

Master Robert Herridge and apprentice Ella Broussard in the art of Texas/German/Czech fiddle;

and Master Valerie Ryals and apprentice Faith Nugent in the art of Texas Old Time fiddling.

Texas Folklife's Apprenticeships in the Folk Arts program encourages the continuation of Texas's traditional arts by providing support for master artists to train qualified apprentices. Awardees will participate in one public presentation of their traditional art form in consultation with Texas Folklife. Teaching an apprentice gives the master artist the opportunity to refine his or her craft and gives the apprentice a chance to learn an art form that they, in turn, can teach others. Apprenticeships breathe life into the traditional arts and foster the continuation of that art form.

This year’s master and apprentice pairs run the gamut of traditional arts from West African djembe and balafon music to Creole, Cajun, and Czech fiddle to Native American healing arts. The masters and apprentices come from all over the state, including cities such as Dallas, Port Arthur, Houston, and Austin; and towns such as Lockhart, Schertz, Coppell, and Corsicana.

“The Apprenticeship Program is crucial to our mission at Texas Folklife,” said Executive Director Charlie Lockwood. “One of the ways we help preserve Texas’s diverse cultures is to help maintain cultural transmission of the traditional arts. In the past we’ve supported everything from lute-making to horse saddlery. This year I’m looking forward to the different varieties of music, dance, and craftwork as well as Native American healing. And I’m very much looking forward to the public presentations of our masters and apprentices.”

This program is made possible in part from a State Partnership award from the National Endowment for the Arts, which believes that a great nation deserves great art, in partnership with the Texas Commission on the Arts. Additional support provided by the Cultural Arts Division of the City of Austin Economic Development Department and the Houston Endowment.

Texas Folklife is a statewide non-profit organization dedicated to presenting and preserving the diverse cultures and living heritage of the Lone Star State. For over 30 years, Texas Folklife has honored cultural traditions passed down within communities, explored their importance in contemporary society, and celebrated them by providing accessible and joyful arts experiences.