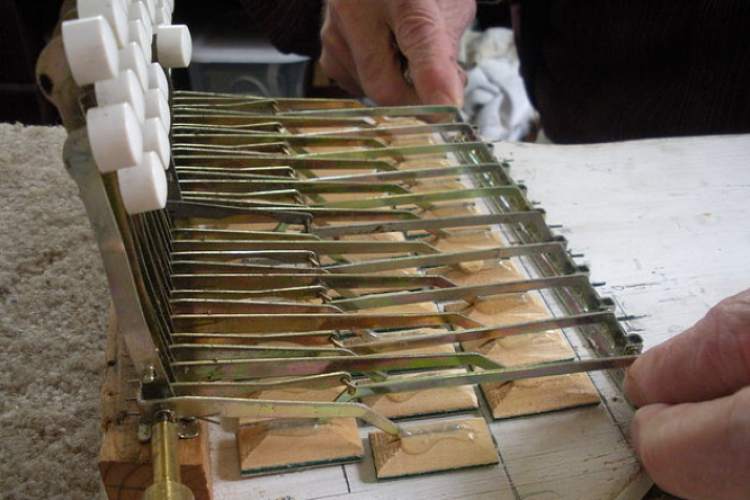 The various parts that make up an accordion can seem daunting upon first glance. The accordion and tuning repair shop that Master Artist Augustin “Gus” Escobar (pictured right, on the right) runs outside of his house in Schertz contains an immense array of accordions and accordion parts all throughout the workshop. As full accordions line the walls, various reeds and treble arms are organized into small plastic boxes, while the wooden blocks that hold the reeds together in the accordion are sectioned off in their own space. As Mr. Escobar and his apprentice Bradley Williams (pictured right, on the left) describe the various projects they’re working on, the deep knowledge required to work on accordions is immediately apparent.

To give greater context of the vast amount of parts that comprise the accordion, consider the amount of reeds that are contained within a button accordion. For each button, there are two reeds attached to it; so, for a button accordion with 31 buttons there are a total of 62 reeds within one accordion. Particularly in conjunto music, musicians prefer to play in tunings different from what is provided in the factory model accordion. In order to achieve this preference, reeds are flattened or sharpened by adding or removing weight to an individual reed, respectively. The work required is dependent on the tuning itself and the current condition of the accordion; sometimes only a couple reeds need to be adjusted, while other times several require attention. Regardless, this requires an attention to detail and a steady hand.

It’s no surprise, then, that Mr. Escobar had an early interest in discovering how different objects worked. As he explains, “When I was a kid, I tinkered with a lot of different clocks…I guess I got it from my father. My father was a carpenter, a barber, blacksmith, farmer; all kinds of different things. He would do everything.” This early interest in tinkering with clocks, like his father, would spread outward. This quickly manifested in working with his cousin, Roy Escobar, who showed him how to tune the instrument: “I was about thirteen, fourteen years old and he was blind. So he would tune by ear by playing the accordion. I would see what he was doing, and I would help him with the wax. He was so critical on filing, he would use a little whetstone instead of a file so he wouldn’t damage the tongue of the reed. He was a perfectionist.” From this early introduction into accordion tuning in the 1950s, Mr. Escobar expanded his knowledge of the instrument, either through other accordion repairmen or trial and error, to include a variety of repairs, tunings, and part manufacturing. His apprentice, Bradley Williams, states that “Gus is like a star. He’s the man to go to in San Antonio for anything.” It was a desire to learn and continue this knowledge Mr. Escobar possesses on accordion tuning and repair that led Bradley to apply to the Apprenticeship Program.

Like Mr. Escobar, Bradley possessed an early interest in discovering how things worked, and how to repair and create objects. Playing with the conjunto group in Austin Los Pinkys for over two decades, he dedicates equal time to working on accordions. Bradley states that the best part of doing this work is “Realizing you don’t have to go to the store and buy something. You can buy a repair kit or make the part yourself out of something with better material than what you started with. For me, it’s not just with accordions now; now it’s everything I do.” While he had known some ways to tune an accordion, it was not until working with Mr. Escobar under the Apprenticeship Program that Bradley learned more complicated repairs, such as replacing tone arms. Following the do-it-yourself attitude, the apprenticeship has also allowed for customizing the very tools used in accordion tuning and repair. “The thing about being an accordion tuner,” Bradley comments, “you’ll really be surprised at the ingenuity of a lot of people, and how they try to repair stuff.” For Mr. Escobar, almost, if not all, of his tools have been customized or made from scratch in order to better serve him for a certain task. A heavy piece of piano wire is turned into a tool to lift reeds, while multiple spherical holes are cut into a wooden board to hold the multiple reeds in an accordion. Gus jokes about his ingenuity in creating these tools, declaring “Lazy people are going to look for easy ways to do their job!”

The experience that Bradley Williams has gained from working closely with Mr. Escobar has manifested into his own accordion tuning and repair business in Austin. Pinky’s Accordion Tuning and Repair is directly applying what Bradley has learned from Mr. Escobar in the apprenticeship. Mr. Escobar is focused on continuing the knowledge that he has gained from working with other accordion repairmen, and what he has gained from decades of experience. In a practical sense, Bradley sees the repair shop as an extra source of revenue in addition to performing: “When you’re a musician, you can’t always make money playing music. It’s not always set up that way. You have to figure something else to fall back on if gigs don’t come through. That was basically one of the inspirations for meeting up with Gus one this project: to get my skills much better so I could handle just about anything that comes in the door.”

Read more about the work Bradley Williams has learned from the apprenticeship with Mr. Escobar through his blog posts:

Listen to a story that Bradley Williams participated in for our Stories from Deep in the Heart Project: