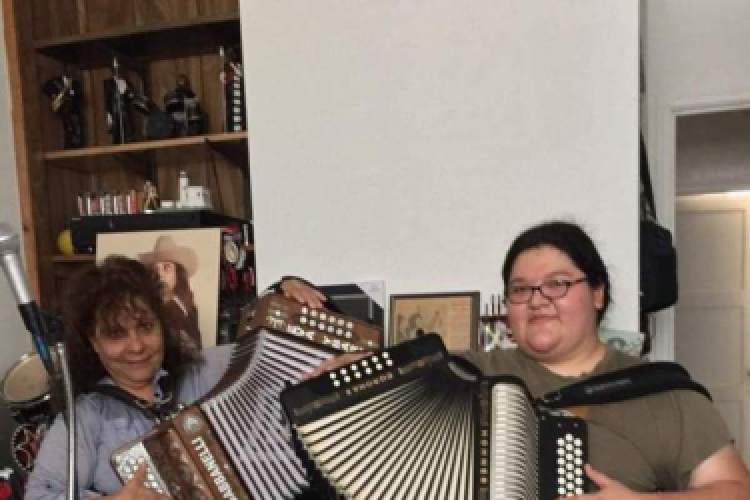 Master Artist Eva Ybarra touts a progressive style of conjunto playing. Far from containing her abilities within a traditional style of playing, Ms. Ybarra flies across the ivory buttons on her Gabbanelli accordion; her fingers speed across the various scales to make it almost untraceable to the human eye. Iliana Vasquez, her apprentice, explains her uncommon style in greater detail: “She’s one of the few people that actually plays the bass side; you don’t see very many people do it. It’s common for accordionists in norteño or conjunto to take out the reed blocks on the bass side to make it lighter.” This equally continues through Ms. Ybarra’s teaching style. Iliana pores over the thick volumes of music theory books comprising scales, chords, and other techniques that are reinterpreted on the accordion. She shows me the book she’s studying, a thick piano book comprising a variety of scales and chords, which she has reinterpreted for the accordion. “Eva as a teacher is more attuned to the level of the student and she starts from there” Iliana states about Ms. Ybarra’s teaching style. “She’ll supplement what they already know with new information.”

This idea of being progressive extends beyond the music, as well. Conjunto has historically been the music reserved solely for men; especially for Ms. Ybarra’s generation, women were often restricted from the music entirely. Her entrance into conjunto music started early when, at age four, she taught herself how to play accordion by listening to the songs on the radio. Soon after, she was standing on soda crates, performing for the public. But even as a young girl, she received criticism. Ms. Ybarra recalls, “One time, there was a lady who told me, ‘Don’t be acting smart. Tell the people that your older brother taught you how to play the accordion.’ And he never did…It was the radio.” Her mother, viewing the accordion as an instrument reserved solely for men, tried to switch her to piano. It would be her father that kept her playing conjunto, feeling that it was her destiny to play accordion. The struggle of being a woman conjunto accordionist only continued throughout the majority of her life. As she states from her vast experience, “We have a hard time with the machismo. With the men. They cannot see a lady being the leader and doing arrangements.” But what has emerged from decades of resistance on the part of Ms. Ybarra, along with other women conjunto musicians, is a new generation of women entering into conjunto and playing instruments previously relegated solely to men.

Women like Iliana Vasquez have, over the past fifteen years, increasingly challenged gender norms within Mexican-American music. A graduate student in the Department of Mexican American and Latina/o Studies, Iliana has combined the academic side of conjunto music with her own experience performing. With previous experience in mariachi, Iliana rejected the violin and trumpet – the only instruments that women were expected to play – in favor of the guitar. “I’ve been unconsciously…challenging the gender norms in music” Iliana states on her experience in mariachi. “I didn’t go for violin…There was a reason I went for guitar. Because I wanted to, and there weren’t that many women playing it.” It was the accordion, however, that would be the greatest fit. Like Ms. Ybarra, the accordion felt like fate. As Iliana states, “I’m more comfortable playing [the accordion] than the other ones. It’s just a feeling that something’s in here.”

Unlike Ms. Ybarra, however, it was Iliana’s mother that pushed her to pursue an interest in accordion. While her brother was the first to ask for a piano, it was Iliana who continued to play well after he lost interest. Well before her interest towards accordions in the first place, she recalls her mother “Whispering in my ear [when] leaving the music store, ‘Did you see the accordions? Which ones do you like?’” The first time that Iliana and Ms. Ybarra met is also due to Iliana’s mother. Iliana remembers this first encounter: “She was actually there when me and Eva met. She was the one who pushed me to get up onstage and play a song with Eva…I was nervous, but my Mom was the one who pushing me. She’s very proud of me.” The result of this meeting would lead to Ms. Ybarra and Iliana participating in the Apprenticeship Program, as Iliana learns from Eva, eventually creating her own unique style of playing that can be deemed characteristically Iliana.

There is still a close tie to one’s roots, however. Ms. Ybarra has traveled to, played, and taught in places like Seattle and New York City. But she is proud of being born and raised in San Antonio, a place she has no intention of leaving. She continues to live in the same neighborhood where she grew up, playing for the people she loves. “I belong to the people,” Ms. Ybarra states. “I belong to them.” Iliana, too, for incorporating methods of jazz into conjunto playing, still regards traditional conjunto songs as important. She remarks, “There are…songs that I like that are super traditional, and I just like them that way.” The ultimate goal for Iliana is to combine what she has learned about conjunto through academic publications with her own experience performing the music itself, something she feels is underrepresented when discussing conjunto. But as Iliana herself continues to challenges traditional ideas of what is acceptable when playing conjunto music, Ms. Ybarra sees the critiques as a form of empowerment. “There’s a lot of people who are going to say, ‘I don’t like the way she plays.’ Don’t listen to them; they did that to me. It’ll make you stronger. If they don’t like the way you play, then practice more.”