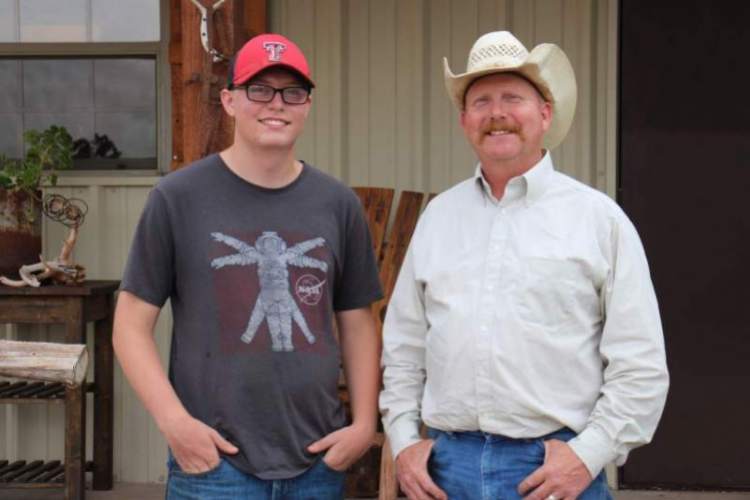 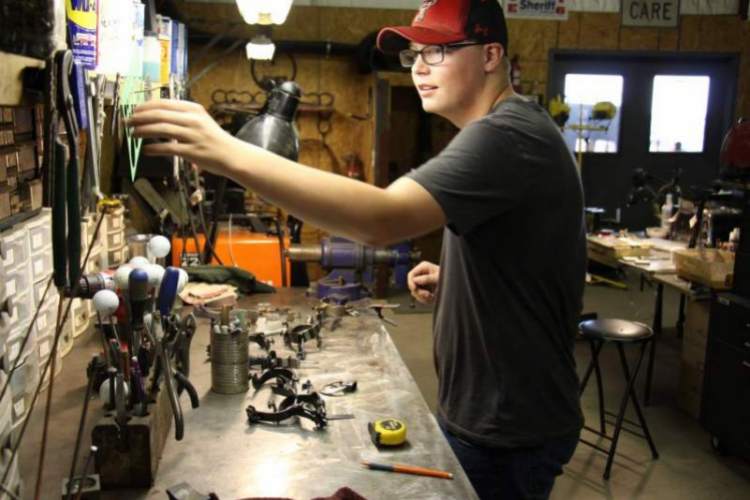 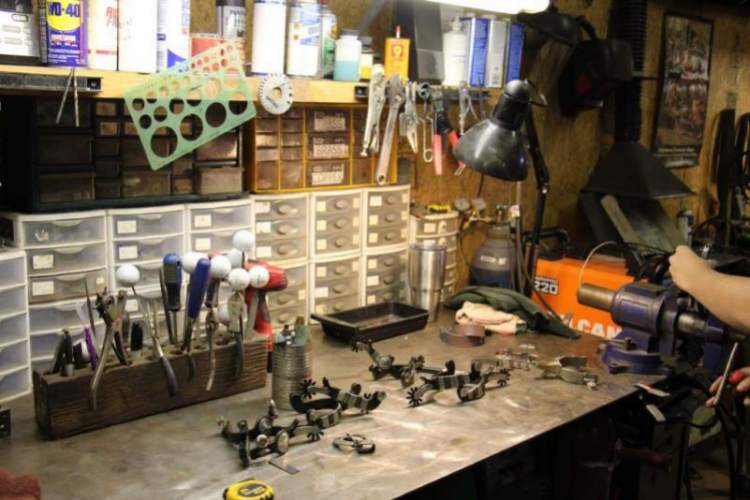 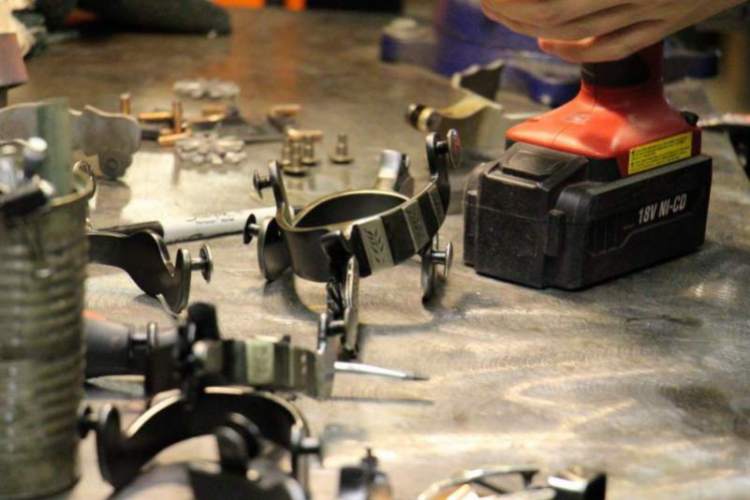 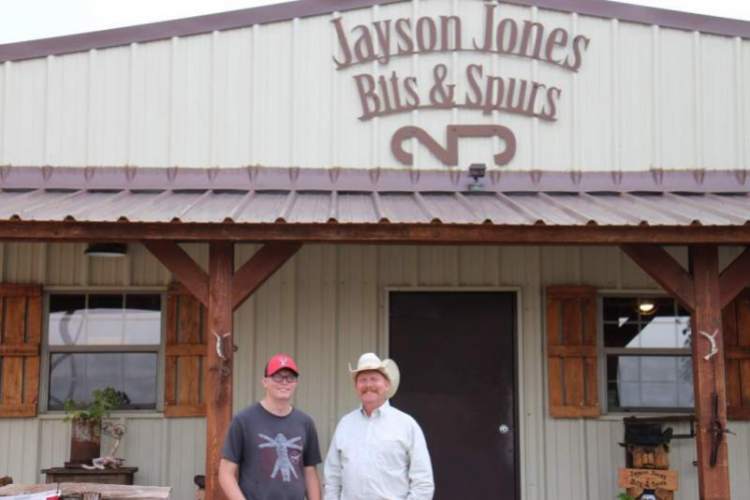 While recognized as a master spur maker, Jayson Jones didn't get started in the craft until later in life. Growing up in Sherman, much of his early life was spent cowboying across the various ranches in Texas and New Mexico, representing a cowboy lineage stretching back to his grandfather. As Jayson explains, “It’s just something that you’re born with; it’s in your blood…It’s a great lifestyle…It’s just something you love.” While not starting in spur making until later in life, he always had an appreciation for high quality cowboy gear. But living on cowboy wages, it was simply out of reach. Unable to pay for high quality gear, Jayson instead took up the task of learning to build his own pair, using spare parts around the ranch. Jayson reflects on this experience, stating, “I tried to build me some stuff, and boy did it look terrible! It was bad.” While this first pair was crude they were nonetheless functional, a source of pride for Jayson which still hang in his house. From this first pair Jayson continued to pursue spur making, eventually starting his own business upon retiring from cowboying in the 2000s.

From here Jayson continued to improve, learning mainly on his own. Although some spur makers would be willing to give advice, most saw it as losing business by sharing trade secrets. Jayson mentions one such spur maker while working on a ranch out in Muleshoe: “I’d go to another guy’s shop to pick up a little knowledge, but he would just quit working as soon as I walked into the door. But I asked him where he got his silver at, and he’d just say, ‘Oh, I buy it from some Indians over in New Mexico.’ But he would never really tell me where to get it. But he said, ‘I’ve got some scraps of silver around here and I’ll sell you those.’ He shot off an ungodly price he wanted for them – I couldn’t afford that!” Improving in the craft therefore came through his own experience and learning from others on the rare occasion.

While working in Whiteface, however, Jayson came into contact with Mike Richardson, a local high school shop teacher that would also cowboy on the same ranch. One of the few gear makers willing to offer advice and instruction, Jayson’s artistic side improved immensely under his direction. Incorporating what he learned on his own with the time spent with Mike, the improvement in Jayson’s work eventually allowed him to transition from giving away his work to other cowboys to selling. This allowed for the purchase of better tools which, in turn, yielded better pieces and, over time, a shop of his own.

Now living in Quanah, Jayson’s work is in constant demand by working cowboys and collectors alike, a months-long waiting list testament to the popularity of his work. Jayson has equally exhibited his work across various trappings shows such as the Western Ranching Cowboys’ Association World Finals in Amarillo, and Western Gear & Art Show at the Ranching Heritage Center in Lubbock. But while the high artistic quality of Jayson’s spurs are testament to the mastery of his craft, it doesn’t mean anything if it doesn’t have a functional purpose; in Jayson’s words, “I’d rather have something that really works nice than something that looks pretty.” This sentiment is echoed by the main title on his website, “Made for the Working Cowboy,” further emphasizing the spurs being built are not only visually appealing, but are made for everyday use on the ranch.

This same working cowboy philosophy is continued on to his son and apprentice, Jaydon Jones. Jaydon started learning from his father early, entering the shop at just eleven years old. Though immediately possessing great ambitions from the start, he quickly discovered working in the shop was more difficult than it appeared: “I remember I wanted a really nice belt buckle… a big ol’ American flag on a massive ol’ buckle. That’s not quite how that works, though.” With the advice of his father moving him towards a smaller buckle to start out, Jaydon eventually made his first belt buckle, “A little star in the middle of it that wasn’t at all well-cutout or straight, sitting on top of a circle. Instead of doing a lot of big engraving that I do now, we just put a lot of divots around the star.” But like his father, while not the same buckle he had planned in the beginning, it was functional and, most importantly, served a purpose. Especially during the long summers on the ranch with little to do, Jaydon found working in the shop as a great way to pass time, as well as a way to earn some spending money by selling his work as a young gear maker.

Now seventeen, Jaydon has continued to advance his work. Now pursuing spur making, learning the craft has come with a whole new set of difficulties from past experience in building belt buckles. Cutting out the shank – the long part that holds the rowels in the back of the spur -; bending and welding the band of the spur; and difficulty engraving on a bending surface are just some of the challenges Jaydon has faced as he transitions into spur making. He specifically mentions the hangers of a spur, which move around freely rather than being stuck on, as something that took time to get used to. As he explains, “I had to make ten of those things! I’d build it, but it wouldn’t turn right, or just not cut or bent right. It’s hard, but I’ve gotten it. Finally!”

Jaydon’s experience reflects the artistic quality and functional purpose that comes with every spur built in Jayson Jone’s shop. Each piece is handmade from start to finish, something that Jayson stresses as essential in continuing the craft. Although computers have led to increased popularity to have designs done digitally, Jayson states, “…it’s not some guy pounding it out with a hammer on an anvil. We’re trying to stick to that tradition, where everything is still handmade: all the silver is still cut by hand with a small jeweler saw, everything in the shop is still cut by hand.” While it’s possible to purchase all the parts of a spur online and easily assemble, Jayson continues, “To me, that’s where you lose your art form…I think that someone who is collecting that sort of stuff would rather have someone who’s put in blood, sweat, and tears into a piece of art rather than something that some modern technology has cut out and just basically put it together.” In both art and function, the Jayson Jones continues the “Made for the Working Cowboy” focus not only through his own work but through the work of his son, passing down the knowledge of top artistic quality and functional purpose that have come to symbolize Jayson Jones Bits & Spurs.

Listen to Jayson Jones describe how he made his first pair of spurs: