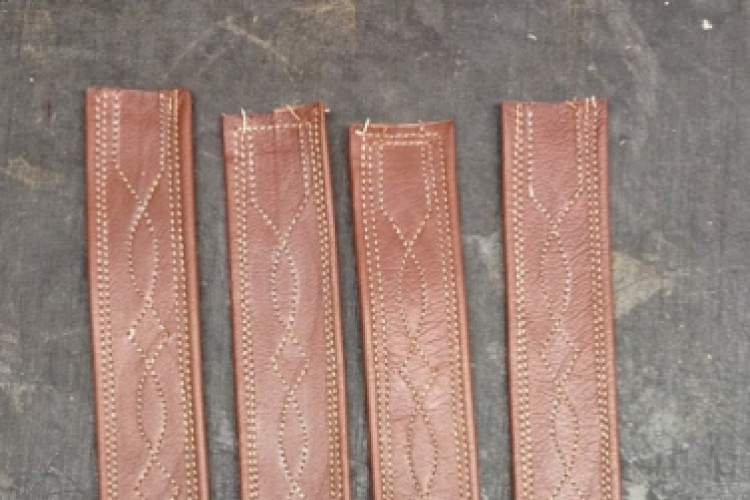 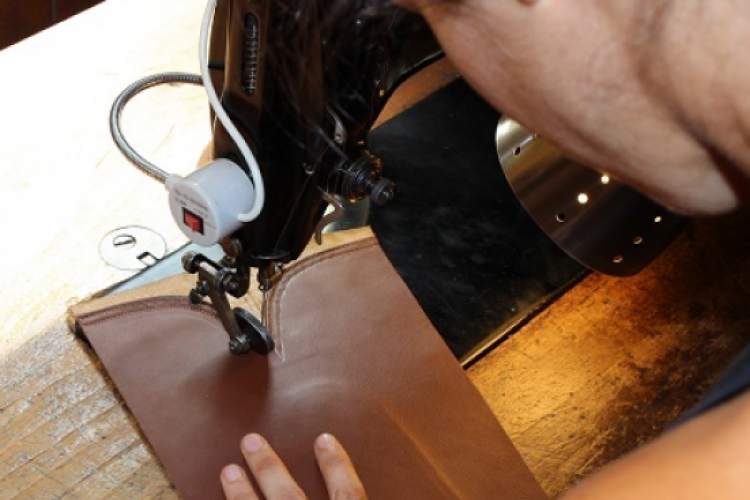 Some of the earliest introductions to shoemaking for Master Artist Lee Miller and Apprentice Dana Perrotti was a practice in trial and error. For Lee, an early attempt to change the shape of a boot’s toe with a saw resulted in the saw coming right off the boot entirely. Dana lovingly refers to one of her earliest projects making shoes as “that really ugly loafer”: “part of the reason it was so ugly was because of the leather that I chose. I went to this warehouse and I found all the leather that fell off the back of trucks, and I bought it for a discount. But I didn’t know what I was looking for. One of them was really thin, and it just wasn’t nice; they just didn’t go together. But I had no idea what I was looking for.” But like that of a phoenix, these early mishaps evolved into an immense dedication to their craft of creating cowboy boots. For Lee, the desire to make cowboy boots led to a job working for the famous Charlie Dunn in Austin, eventually taking over his shop, Texas Traditions, in 1986 after Dunn retired. The decades of experience that Lee has gained – both from working and running the shop – now continue through the apprenticeship with Dana, where “that really ugly loafer” has led to her creating her first pair of cowboy boots.

Lee’s family had of history working with their hands to create works of art, and Lee was no different. Growing up in Rutland, Vermont he immersed himself in drawing, sculpting and painting; qualities that would have a significant impact on his future career with cowboy boots. A large influence on his decision to enter into shoemaking was his godfather, who worked in the shoe department of a local business and had people from all over the state come to him for fittings. The “shelves and shelves with different widths and sizes,” as Lee describes it, captured his interest to the point when, turning 18 in 1972, he decided he wanted to enter into bootmaking as a full time profession.

The road to becoming a bootmaker wasn’t so simple, however. Lenoci’s, a shoe and leather repair shop, had outright rejected his request for a job until this intervention of his grandfather. Even then, as Lee recalls, “I worked for Lenoci for two months. Never got paid. One day…he went over to the cash register. He opened the drawer, and he handed me ten dollars. That was my first paycheck.” With a desire to learn more about the bootmaking craft, Lee would leave his home state of Vermont for the first time to study at the technical school at Oklahoma State University in Tulsa. But well before leaving Rutland, the musician Jerry Jeff Walker had already notified him of the famous Austin bootmaker Charlie Dunn through the song of the same name.

“It took them four months to find me,” Lee states when he was contacted to work for Charlie Dunn in 1977. “I was living on an Indian reservation in Utah. So they called me up and they said, ‘You want a job working for Charlie Dunn?’” Lee jumped at the chance, and arrived in Austin around Thanksgiving of that same year. While he finally had the chance to meet his hero in person – like meeting Picasso, Lee comments – you quickly realize your own lack of experience: “Even though they said I was good, you quickly found out that you kind of sucked! You don’t know anything until you’re in the presence of what is good.” It was an arduous process over several years to meet the demands of Charlie and others in the shop, but the dedication to his craft showed through his work. As a result, when Charlie retired in 1986 he handed control of the shop over to Lee, who continues to run Texas Traditions; making, repairing, and teaching individuals such as Dana Perrotti the bootmaking process.

Like Lee, Dana had an early interest working with her hands. Her grandfather was the first introduction to leatherworking, who showed her projects like wallets and coasters. While she had moved to silversmithing for a time, she like the practical function inherent in leatherworking and, more specifically, bootmaking: “Boots and leather goods have always been something that have caught my eye and I’ve found more useful. I really enjoy making things that have a function and a purpose.” It was this emphasis on functionality and a desire to work with cowboy boots that led to her establishing a relationship with Lee over Instagram and, eventually, participating together in the apprenticeship program.

But as Lee discovered when he first started working with Charlie Dunn, the bootmaking process is demanding and arduous. “Whenever you do anything with your hands,” Charlie states, “it’s a hard way to earn a living. You’re not mass producing anything…you live and die by what you do.” But with these demands, Dana argues, comes an equally worthwhile reward: “I was really excited by the idea of being able to make something not only for myself but for other people. That they would really be appreciated, and personal, and loved. I think anybody who makes anything wants that for what they’re doing.” Dana doesn’t plan to stop with just one pair of cowboy boots, either. After this pair, she plans to move on to the next; from there, moving on to the next and continually improving her craft. As she states, “I want to keep making boots, and I want them to be better than the ones before.”

Follow Dana’s blog, Dperrotti Boots, as she describes and showcases the bootmaking process:

Listen to “Texas Traditions: A Boot Worth the Wait” from our Stories from Deep in the Heart Project featuring Lee Miller and Dana Perrotti: