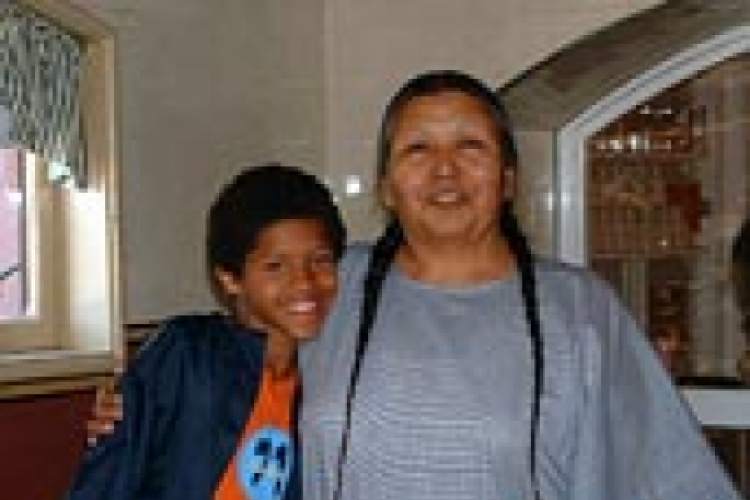 Curriculum Guide: Powwow in the Schools

What is a Powwow? A powwow is an American Indian cultural event involving dance, drumming, song, food and other forms of traditional artistry. There are generally considered to be two kinds of Powwows: tribal-specific powwows and pan-Indian powwows (or competition powwows). Tribal-specific powwows are often private gatherings limited to one tribal community. Held for special purposes and ceremonies, tribal-specific powwows are usually conducted on a reservation or strictly within a specific Indian group. Competition powwows, like the Austin Powwow and American Indian Heritage Festival, are intertribal events open to the general public. Competition powwows often draw hundreds of dancers and drummers to compete for cash prizes and thousands of spectators to enjoy the dancing and music. Despite the competitive and often commercial nature of competition powwows, powwows hold sacred and religious significance for many of the American Indian participants. Powwows are important to the American Indians because of their role as community-builders. They provide an opportunity for family and friends to gather together and visit, for older American Indians to pass on important traditions to younger generations, and to teach non-Indians about traditional and contemporary Indian culture. Competition powwows are also an economic venture. Beside providing an excellent venue for artisans to sell their crafts and families to sell homemade American Indian food, top-notch dancers can earn their living by travelling from powwow to powwow winning competitions. During powwows, American Indians can break from their day-to-day lives within American society and celebrate their Indian heritage and culture. Competition powwows like the Austin Powwow are fairly recent traditions, beginning in the early 20th century and becoming very popular in the seventies and eighties. Competition powwows that we see today are products of interesting, dynamic and complex social, cultural and historical factors. At the same time, different aspects of the powwows are constantly changing a powwow is a living cultural event. The Austin Powwow is intertribal, meaning that many different tribes, each with its own history and cultural traditions, attend and compete. These intertribal powwows often lead to the development of pan-tribal traditions, or to the heavy borrowing of cultural traditions between tribes. Intertribal traditions are themselves important and meaningful, but they are different from traditions which are rooted in the individual tribes and their communities. Participating artists in the Powwow in the Schools program visit the classroom to demonstrate some of the traditional art forms that not only have specific meanings within their home tribes, but also have a valuable role in both ceremonial and competition powwows. Powwow in the Schools focuses on the important role of certain material art and performance traditions in the maintenance and preservation of Indian culture, especially powwow activi-ties. It would be impossible to perform a powwow, as we know it today, without the pine needle basketry, beading techniques, leatherwork, and regalia discussed in the Powwow in the Schools program. Just as powwow dancers, singers and drummers learn their skills from the elders of their tribal community, the artists who create these objects also acquire their knowledge from family, friends and other community members. Checklist
When a Traditional Artist Visits Your Classroom This checklist is generated specifically for your participation in the 2002 Powwow in the Schools program. However, you may find it useful to refer to this list any time you have a presenter visit your classroom. A table. A low and long table will provide an area for the artist to display his or her work and also allow them to have something to lean against as they talk to your students. A chair. The artist will probably want to sit down at least for part of his or her demonstration. Water supply. The artist will be speaking in front of groups all day and will probably need something to drink during his or her session with your classroom. Please offer bottled water or point out where the water cooler is in your classroom.

The Artists The American Indian artists participating in this year's Powwow in the Schools program are some of the finest tradition bearers from several different tribal communities. All are highly respected artists who produce objects traditionally used by American Indians. For many of these artists, providing the supplies and materials necessary for powwow activities is a full-time job, and for some, there is not enough time in the day to meet the demand for their work. One of the following artists will give a presentation in your classroom. We have provided this curriculum guide to help prepare your students for the artist¹s visit and to assist your classroom discussion after the artist has left. We suggest that you discuss the background of the artist (i.e. tribal affiliation, artistic tradition) with the students before the artist¹s visit. One possible activity for your classroom is to ask your students to research on the internet the tribe with which the artist affiliates. Ask your students to write down a few questions that they would like to ask the artist. Interaction between the artist and the students is an essential part of the Powwow in the Schools program. Also, remember to talk with your class about Native American culture throughout the school year so that it becomes a natural component of their AISD education.. Choogie Kingfisher (Kituwah Cherokee) Storyteller Choogie Kingfisher was born and raised in the hills of Green County in Northeast Oklahoma. A Kituwah Cherokee storyteller, Choogie has been performing throughout the United States for the past 16 years. Many of Choogie¹s stories have been passed down to him from his family, elders and friends. Marjorie Battise (Coushatta) Pine Needle Basketry Marjorie Battise, a member of the Turkey Clan of the Coushatta Tribe of Louisiana, makes pineneedle, sagegrass, and river cane baskets. Marjorie comes from a line of tribal chiefs beginning with her great-great-grandfather Jeff Abbey. Marjorie began learning to make these different types of baskets from her mother at the age of eight. These baskets continue to be popular among buyers and traders at powwows. Irene Hamilton(Cheyenne) Beadwork and Moccasin Making Cheyenne people have long been known for the exquisite beadwork that decorates their clothing and moccasins. Irene Hamilton learned to make moccasins in the traditional manner and knows the appropriate ornamental designs to use. For this reason, her work is highly prized among powwow dancers. "In 1932, at age six," she remembers, "I observed my grandmother constructing a moccasin while living in an encampment at Colony, Oklahoma. I have had great influence from my mother and sister and cousins. Some hobbyists are beading moccasins without knowing the meaning of color or design." Mrs. Hamilton, however, continues to use the knowledge of traditional color and design passed on to her from family. Tribal beadwork rarely serves just as decoration; it forms an integral part of the culture and rituals for which it was designed. Vanessa P. Jennings (Kiowa) Bead and Leatherwork, Regalia Making Vanessa Paukeigope Jennings is one of very few Oklahomans to receive the prestigious National Heritage Fellowship from the National Endowment for the Arts. She received the award for her efforts to preserve Kiowa heritage. Ms. Jennings spent most of her childhood with her grandparents. From them, she began learning traditional Kiowa artistic techniques, especially from her grandmother, Jeanette Berry Mopope. Jennings' detailed work encompasses a wide range of creative effort: buckskin dresses, leggings, cradle boards, shields, dolls and horse equipment. She has been commissioned by the Kiowa tribal authorities to make ceremonial regalia for important occasions. Ms. Jennings is one of the last Kiowa members to actively preserve tribal traditions in her life; she compares herself to a dinosaur, fearing that when she passes, much of the traditional Kiowa lifestyle will die with her. Powwow Etiquette A first visit to a powwow can be overwhelming. Here is a list of basic rules of conduct that a person should follow at a pan-Indian competition powwow, like the Austin Powwow. Please familiarize yourself and your students with these basics of powwow etiquette beforehand so that everyone can enjoy the amazing sights and sounds at the powwow.

Remember you are a guest. Have fun, ask questions, and meet people. Everyone there is welcome! Photography Photography is generally permitted, but please remember the following rules:

At the Austin Powwow Every powwow has characteristics that distinguish it from other powwows, but certain elements are fairly consistent, including the presence of dancing and of art sales. The Austin powwow is an inter-tribal competition event that is open to the public.
Admission is free. If you attend the Austin Powwow and American Indian Heritage Festival on Saturday, November 2nd at the Toney Burger Center, you are likely to experience the following: During the days before the powwow, Native Americans arrive from all over the country. The Austin Powwow is the largest competition powwow in this part of the country; having drawn approximately 25,000 attendees and participants in past years. The Austin Powwow includes people from many different tribes. Outside the Toney Burger Center, there will be booths where people are selling, showing, or just talking about their art. A wide variety of traditional and contemporary Native American art forms are available for people to look at and possibly buy.

Dance categories Many of the styles of dancing you will see at the Powwow originated in specific communities, but today people from many tribes perform these dances. There are several - at the Austin Powwow, including - Traditional Men's Dance

Comprehension Questions Ask your students the following comprehension questions before they head off to the Austin Powwow.

powwows provide an opportunity for families to get together;

powwows allow an opportunity for friends to see each other

powwows are an opportunity for dancers to compete for prizes;

powwows are an opportunity for adult American Indians to pass a part of their traditional culture on to the next generation;

powwows are an opportunity for American Indians to teach non-Indians about their traditional culture.

Everyone is invited to attend. The event is free and open to the public, both Indian and non-Indian.

Questions for Discussion
Here are some questions that you can ask your students to foster discussion on the importance of powwows for many American Indians and of other rituals in the lives of your students.