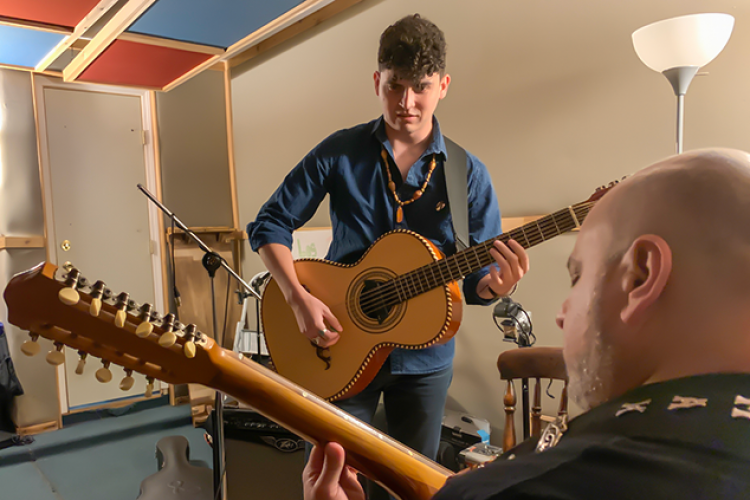 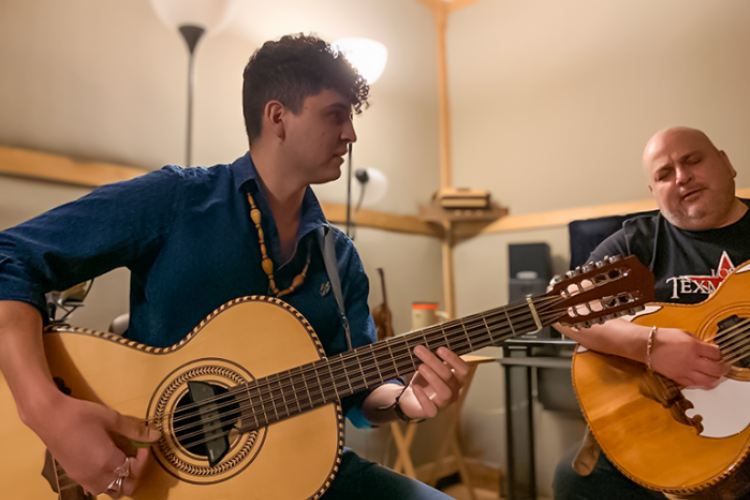 Max Baca and Hunter Chavez's bajo sexto apprenticeship sessions often lasted hours. Max offered Hunter what seemed to be an endless number of riffs, licks, and technical exercises, as the pair carefully studied the distinctive components marking the respective styles of conjunto's greatest bajo sexto players. Inseparable from their focused technical study were episodes of broader reflection. Prompted by Hunter's voracious curiosity, Max, in his characteristically affable manner, told stories, shared insights, and meditated on his life and career as one of the most prominent spokespersons of Tex-Mex music and culture. "Max is a walking catalog. He knows all kinds of stuff. He's been through it. He's taken the bajo and accordion around the world," Hunter says, "He's preserved the actual culture of it, and he's sharing that."

Similarly full of stories and music-making, my interview with Max and Hunter lasted all afternoon. Near the end of our time together, hanging out in Max's home studio in San Antonio, Max and Hunter gave an impromptu performance of the classic canción ranchera "Canción Mixteca," a beloved song that celebrates the Mixteca region in Oaxaca, Mexico. Surprisingly, given the breadth of their apprenticeship, they had not covered this song during their sessions. I quickly realized, however, that this song choice was a calculated decision by Max - an opportunity to throw Hunter "in the fire" and "learn on the spot at the gig." Max starts the song off slow. He lays down a clear three-beat pattern on his bajo while giving demonstrative physical gestures to cue their vocal lines. Intently tuned into Max's musical and non-musical directions, Hunter does not waver; his vocal harmonies are focused, and his playing is precise. With Hunter's familiarity and proficiency manifest, the two pick up the tempo and settle into what is an intimate performance that not only showcases both musicians' dedication to taking the bajo sexto, as Max says, to the "next level" but their unquestionable respect for and deep understanding of conjunto and Tex-Mex music-culture.

Affectionately referred to by Max as "the grizzly bear of guitars," the bajo sexto is a twelve-stringed instrument from Mexico. Working against a convention upheld by many conjunto practitioners that relegates the bajo to mostly providing heavy-handed, backup accompaniment, Max has been teaching Hunter how to tap into the expressive possibilities of the instrument. "You can do whatever you want with this instrument," Max stresses, "Make it respond. This instrument is yours, man, don't let it control you." Relishing these lessons from Max, Hunter is no stranger to seeking advice from more experienced players - a key component of his heretofore largely self-directed learning process.

"I never used to go to gigs or anything or go out to listen to music until I was about 15. That's when I got the itch. I wanted to see as many people as I could," Hunter explains. The itch, as Hunter recounts, began when his grandfather, Alfonso "Poncho" Chavez, passed away. A ranchero who worked on a farm south of San Antonio since he was a teenager, Mr. Chavez was also an avid button accordionist. Reflecting on his childhood, Hunter realized that his grandfather's conjunto music was always a part of his life. "Well, my grandfather had gotten sick, and he stopped playing accordion," Hunter remembers, "I think I realized at that moment all the opportunities I could have had to possibly get into the music." Hunter subsequently picked up the accordion and began working hard to make up for lost time by doing, as he explains, his "own research, history, and digging." "Yeah, he'd come to our gigs," Max interjects, "He'd come and hang out. We'd get him up to play a polka or something. And people would come to the stage, you know, because he's got a stage presence about him." Having swiftly established himself as an up-and-coming accordionist in the Central Texas conjunto scene, Hunter first actually began playing bajo sexto out of necessity when Texas Folklife's 2015 Big Squeeze winner Rito Pena, a good friend of his, needed a bajo player for a gig. "Yeah, he's really the reason why I did pick it up because he didn't have anyone to accompany him. So it was like, 'Well, I know a few chords, so we'll see what happens,'" Hunter laughs, "And now I've grown to admire it, you know, it's my main focus."

Like Hunter, Max was a quick study. Growing up in Albuquerque, New Mexico, Max played in his dad's band, Max Baca y Su Conjunto Norteño, honing his skills at a young age on core conjunto instruments such as the accordion, bass, and drums. It was after his dad took him and his brother Jimmy to Lubbock to see accordion-legend Flaco Jiménez with his formidable partner Oscar Tellez on bajo sexto that Max squarely dedicated himself to the bajo. Max and Jimmy would soon channel the Tex-Mex sound they loved and establish themselves as Los Hermanos Baca, mainstays of New Mexico's conjunto scene. Before long, Max had the opportunity to join the ranks of his musical idols. Flaco invited him to San Antonio to join the Tex-Mex supergroup Texas Tornados in the 1990s. Collaborating directly with his mentors - Tex-Mex trailblazers such as Flaco, Augie Meyers, Doug Sahm, among others - it was Oscar Tellez who instilled in Max a determination to expand the bajo's technical and stylistic boundaries. "Oscar, he told me once," Max remembers, "He goes, 'You can take that to the next level. Wherever I leave it off, run with it, take it to the next level.'" Oscar's inspiring counsel has remained a key catalyst of the boundless creativity that has underpinned Max's now highly decorated musical career.

As their performance of "Canción Mixteca" progresses, Max and Hunter's penchant for exploring the technical and expressive range of the bajo is clear. Listening intently to each other, the two engage in a dialogue consisting of running bass lines, melodic flourishes, and rhythmic variations. Before the repeat of the song's final stanza, Max and Hunter's musical conversation reaches a climax, as they hit a powerful line that descends through the bajo's middle register in unison. Wide smiles ensue, confirming the duo's shared musical vocabulary wrought through their apprenticeship. "I'm hungry for it. I want to know everything about this," Hunter explains, "it's something I've been working up to, you know, doing my research and understanding where it comes from and why. It's not just for what's hot at the moment. I want to learn everything about this that I can and understand the true meaning of it."

Technical virtuosity on the bajo sexto is not a means to an end, however, it must support, following Hunter, "the true meaning" of the music. Throughout our interview, Max and Hunter repeatedly emphasize the importance of "the song." They use this term to refer to the history and deeply affecting quality of Tex-Mex music and conjunto, the accordion and bajo sexto-driven popular music that has continued to maintain relevance for many folks on both sides of the Texas-Mexico border since the early twentieth century. As such, in their performance, the two not only balance a sensitivity to each other but mindfully calibrate their collective musicianship to be respectful of the historical, emotional, and personal associations of "Canción Mixteca."

Indigenous poet José López Alavez wrote the lyrics of "Canción Mixteca" in 1915 as the Mexican Revolution (1910-1920) forced him away from his home in the Mixteca region of Oaxaca, a state in southern Mexico. An ode to the region and its people, the song has become something of an unofficial anthem. Having appeared in and on countless films and recordings, Alavez's words continue to elicit regional and national pride for those living in and outside of Mexico. Sensitive to such complex negotiations of Mexican and Mexican-American identities, Max and his band of over 20 years Los Texmaniacs included "Canción Mixteca" on their 2010 Grammy Award-winning album Borders y Bailes.

"Canción Mixteca" reminds Hunter of his grandfather and causes him to reflect on the context and intentions that drove his grandfather's music-making. "He grew up with Fred Ojeda, and they just played around whenever they could. It didn't really matter if there were people there or not. They just played," Hunter relates. "Fred Ojeda," Max quickly jumps in to clarify, "was, for years, Flaco Jiménez's singer, and he played bajo sexto. Flaco and Fred had a band together that was just bajo and accordion. So your grandfather played with him and hung out with him? That's cool!" Hunter continues: "Yeah, that music, you know, it's nothing but heart - nothing but singing and sharing the song. So, yeah, that's what this is all about."