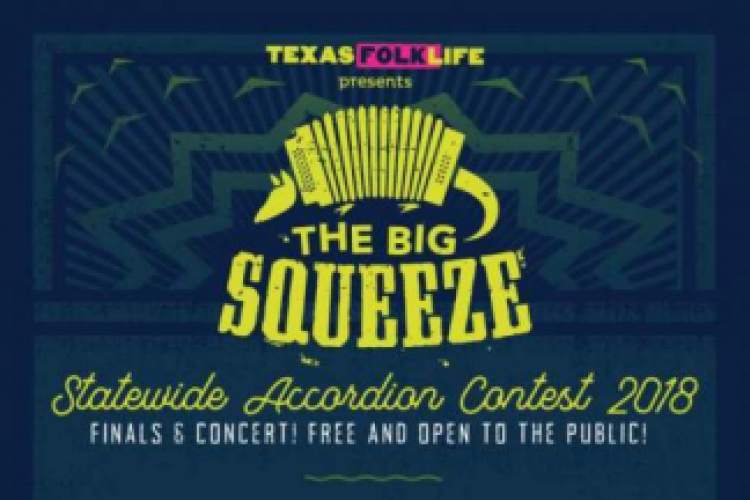 Free Concert and Contest Finals to be held at the Bullock Museum on Saturday, April 21

Grand Prize Winners will be selected in the following updated four categories:

Austin, Texas – March 27, 2018 – Texas Folklife is thrilled to announce the 2018 Big Squeeze Statewide Accordion Contest Finals and Concert will be held on Saturday, April 21, from 1:00-5:00 p.m. at the Bullock Texas State History Museum. The event is free and open to the public and will be held inside on the first floor under the Grand Rotunda. Up to twelve finalists, three from each category, will be selected in early April by a panel of judges, and will perform at the Big Squeeze Accordion Contest Finals and Concert before a panel of judges and the public, accompanied by Austin Music Hall of Fame’s Conjunto Los Pinkys. (A press release will be issued to announce the finalists.) The free afternoon concert will feature performances by Grammy-nominated musician, producer, and polka ambassador Alex Meixner, and Los Fresnos High School’s Conjunto Halcón, founded and directed by Texas Folklife’s first Big Squeeze Champ Juan Longoria Jr.

In addition, there will be a Big Squeeze Brunch and After Party and Accordion Workshop (with Grammy-nominated Alex Meixner) held on Sunday, April 22, from 11:00 a.m.-12:30 p.m. at the Texas Folklife Gallery. The event is free for Big Squeeze 2018 finalists and their families and for Texas Folklife members (members contact Texas Folklife for promo code). For all others admission is $10:

Proceeds will benefit Texas Folklife’s Big Squeeze program. Parking for the event is available in Texas Folklife's gravel driveway, on street immediately in front of building, and Asterra Properties (located next door). Overflow parking available at Recycled Reads (5335 Burnet Rd). Please use spaces in the back or on the south side of the Recycled Reads building.

This is the 12th year for the Big Squeeze program that supports up-and-coming Texas youth accordionists. The contest is one of the ways in which Texas Folklife carries out its mission to preserve and present Texas’s diverse cultural heritage. The contest recruits players in all genres of the Lone Star State’s accordion-based music, including German, Czech, and Polish polka; Creole, Cajun, and zydeco; conjunto, norteño, and Tejano.

Since 2007 Texas Folklife has built a reputation as a champion of Texas accordion music genres through the Big Squeeze program, and has supported over 230 young, talented players from dozens of Texas towns and cities in their efforts to carry on these vital community-based accordion music traditions.

This year, Texas Folklife held 9 Big Squeeze talent showcases that were free and open to the public, held in communities throughout the state, and featured music by established accordion artists as well as the young accordion contestants. The showcases were held in Ennis, Dallas, Houston, Nederland/Groves, Corpus Christi, San Antonio, Los Fresnos, and Palmview.

Those who were not able to attend a showcase were able to mail or e-mail their entries to Texas Folklife. The complete contest rules and entry forms are available online at www.texasfolklife.org/bigsqueeze2018.

During the Big Squeeze Accordion Contest Finals and Concert, four Final Grand Prize Winners will be selected from the twelve finalists and from Texas traditional accordion music genres: polka, Cajun, zydeco, and conjunto. The polka genre includes German, Czech, and Polish polka traditions. Cajun & Zydeco will include zydeco, Creole and Cajun musical traditions. And conjunto will include conjunto, norteño and Tejano.

For the 2018 program, Texas Folklife implemented some changes that we hope will encourage more statewide youth participation. The Conjunto Category has been split into two age categories (one for ages 17 and under, and one for ages 18-21) and the Polka Category has been extended to ages 25 and under. There are no changes in the Cajun & Zydeco Category. The Conjunto grand prize category for ages 18-21 is named in loving memory of Anthony Ortiz, Jr., a former Big Squeeze finalist, virtuosic young professional accordionist, and member of the Texas Folklife family who passed away in 2017.

Big Squeeze Program Director Alysha Hernández led the Big Squeeze Program again this year. Hernández brings a decade of experience in communications, film, and live event production. She is a native Texan, born in San Antonio and has spent much of her life in the Rio Grande Valley.

Piper Lemoine and Brenda Martinez of Rancho Alegre Radio will serve as masters of ceremonies at the event this year.

The Big Squeeze still has opportunities for individuals and organizations to become sponsors of the program. There is information on the website on how to become a Big Squeeze Sponsor at: www.texasfolklife.org/bigsqueeze2018 or please contact us by phone at 512-441-9255.

“The Big Squeeze is one of the programs that gives the most joy to those of us at Texas Folklife,” said Executive Director Charlie Lockwood. “It is such an honor and a privilege to meet these young players throughout the state who are doing the work of helping to keep the roots music of their communities alive. In addition, we get to work with committed partners who are helping us in our mission to foster the continuation of traditional Texas music. One of those partners who has been with us for many years is the Bullock Texas State History Museum. We are grateful to be hosted at the museum once again and look forward to an afternoon of amazing music by our special lineup of accordion stars as well as the music of the Big Squeeze finalists and the countdown to the crowning of 2018’s Big Squeeze Champs. Please join us—but be sure to wear your dancing shoes or boots—and help us celebrate all things accordion!”