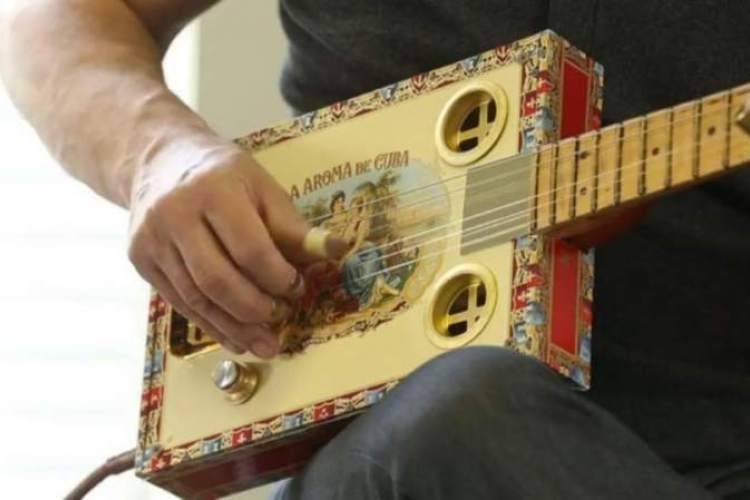 Music in an Intimate Setting

Austin, Texas – March 24, 2016 – Texas Folklife’s intimate music series featuring roots music and Texas artists, and emphasizing the non-profit’s mission to present the state’s traditional arts and culture, is back up and running for 2016. The first concert of the year will be held on Thursday, April 14, at the Texas Folklife House—1708 Houston Street, Austin, Texas—from 7:00-9:00 p.m.

The evening will feature Austin guitarist Adam Ahrens performing on handmade cigar box guitars by Tomas Salas and W.T. Bryant. The concert is being held in conjunction with Texas Folklife’s current exhibit “Cigar Box Guitars.” All of the instruments are playable art and will be for sale by the artists.

Adam Ahrens is a fingerstyle guitarist and multi-instrumentalist who has been based in Austin since 1993. He is known for his work on solo acoustic guitar, residing in roots genres ranging from Hawaiian slack key to Southern Americana, with his feet squarely planted in guitar standards. Slack key has a seat at Ahrens’ table alongside West African high life guitar, Travis style picking, and regionally chosen Mexican/Texana forms.

Tomas Salas is an actor, set design engineer, and long-time cultural activist in Central Texas. He was a founder of the Emma S. Barrientos Mexican American Cultural Center in Austin, and is a regular contractor with Texas Folklife. W.T. Bryant is an actor, director, and designer who has dabbled in blacksmithing, photography, and ceramics. Both Salas and Bryant discovered cigar box guitars several years ago and fell in love with them as an art form.

The House Concert will be an intimate experience. Limited tickets are available and can be purchased at http://texasfolklifehouse4.brownpapertickets.com for $20. There are five VIP tickets available for $30 (includes front-row seating and other goodies). Proceeds will benefit the artist and Texas Folklife’s statewide public programs. Guests are invited to bring their own food and drink to enjoy. More information can be found at http://texasfolklife.org/event/house-concert-series-adam-ahrens-plays-cigar-box-guitars.

“We are pleased to announce the return of Texas Folklife’s House Concert Series”, says Acting Director Charlie Lockwood. “It is especially fitting to begin our 2016 season with this evening devoted to local, handmade art and music. Please join us for this one-of-a-kind event.”

Texas Folklife’s House Concert Series is supported by the members and Board of Texas Folklife, the City of Austin’s Cultural Arts Division, Texas Commission on the Arts.