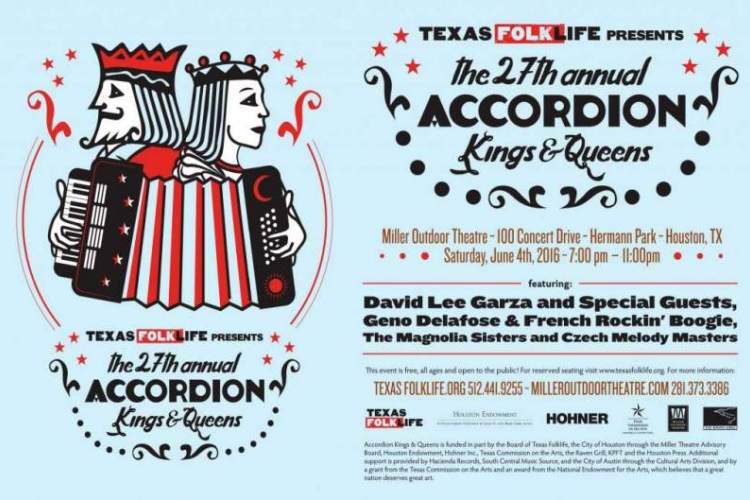 Free Concert to be held at Houston’s Miller Outdoor Theatre on Saturday, June 4

Austin, Texas – May 26, 2016 – Texas Folklife will bring its annual celebration of the state’s accordion roots music to Houston’s Miller Outdoor Theatre on Saturday, June 4, at 7:00 p.m. In keeping with its mission to preserve and present Texas’s diverse musical heritage, the festival will feature stars and legends in polka, Cajun, zydeco, and conjunto. This year’s accordion stars will include David Lee Garza with special guests, Geno Delafose & French Rockin’ Boogie, the Magnolia Sisters, and the Czech Melody Masters.

This year’s event will again be co-emceed by writers and radio hosts Joe Nick Patoski and Tony Diaz. The festival is free and open to the music-loving public. Festivalgoers wanting seats in the pavilion area can pick up their free tickets the day of the festival at the Miller Box Office or become members of Texas Folklife and receive reserved tickets in advance. Membership information is available at http://www.texasfolklife.org/info/membership.

David Lee Garza has had a thirty-year career playing the accordion in Texas. He started playing at age seven in his hometown of Poteet, which he still maintains as his home base. Garza and his band Los Musicales, which includes brothers and founding members Adam and Richard Garza, have generated hit after hit with their blend of progressive conjunto, country, Tex-Mex and Tejano. The group’s overwhelming popularity has launched the solo careers of numerous Tejano stars over the years, including Emilio Navaira, Ram Herrera, Jay Perez, and Marcos Orozco. Despite Gold- and Platinum-level sales from their recordings, it’s been David Lee’s one-off, special projects that have garnered the most national attention:  First, a Grammy and Latin Grammy for Best Tejano Album in 2005 for “Polkas, Gritos, y Acordeones,” a collaboration with Joel Guzman and guest artist Sunny Sauceda. Then, another Latin Grammy in 2013 for “Just Friends.” This year’s Accordion Kings & Queens concert is a rare opportunity to see David Lee Garza in this collaborative setting, which showcases his mastery of his tool of his trade and his art—the accordion—and explores the conjunto roots of his illustrious and iconic career. As a special treat, David Lee has invited a few friends to round out an all-star cast:  award-winning accordionist and vocalist David Farias (formerly of La Tropa F and Los TexManiacs); the bright young accordion star Josh Baca of Los Texmaniacs; and accordionist Berna Rodriguez of Las Fenix, the young, all-sister pop / norteño group based in Houston, and on the rise nationally. Backing this unique accordion ensemble will be the ace conjunto rhythm section of multi-Grammy winner Max Baca, the master of the bajo sexto, and Noel Hernandez on bass (aka Los TexManiacs). This is a one-night-only show not to miss!

Geno Delafose is a zydeco accordionist and singer. His father is the famous zydeco accordion player John Delafose. Geno is one of the younger generations of the genre who has helped create the musical style known as nouveau zydeco. This style is deeply rooted in traditional Creole music with strong influences from Cajun music and also from country and western. His debut album, which was released in 1994, was titled French Rockin’ Boogie. The name of the album became the name of his band with whom he still plays today—and will be on stage with him at the Festival. Geno Delafose was nominated for a Grammy Award for Best Zydeco or Cajun Music Album in 2007 for his Le Cowboy Creolealbum.

The Magnolia Sisters have been called folklorists as well as gifted musicians. The band has a rich repertoire that hails from southwest Louisiana—Cajun, Creole, dancehall favorites, and front porch ballads. In addition, they sing rich harmonies on a cappella ballads, play string band numbers from the 1930s, tell stories, and play songs from long lost Cajun musical scores. The four members include Ann Savoy on accordion, guitar, fiddle, and vocals; Jane Vidrine on guitar, fiddle, and vocals; Anya Burgess on fiddle, guitar, and vocals; and Lisa Trahan on bass, vocals, percussion, and accordion.

The Czech Melody Masters describe themselves as Austin’s only authentic Czech polka band. Their repertoire includes historic melodies they’ve rescued from faded music scores and 78 rpm records. They have performed all over the country and have produced four albums. Members include Dennis Svatek, lead trumpet, lead vocals, and music arranger; Dave Bedrich, trumpet and vocals; Thomas Durnin, stand up bass; Frances Barton on accordion; Rob Schmidt on drums; and Stephen Svatek on baritone and guitar.

“The Accordion Kings and Queens Festival is one of the flagship programs of Texas Folklife,” said Acting Director Charlie Lockwood. “The Festival honors the ‘national instrument of Texas,’ and the legends and superstars performing Texas roots music all across the state in all the different genres—Cajun, zydeco, conjunto, and Czech and German polka. Not only do we get an opportunity to promote this music, more importantly we get the opportunity to enjoy it. Please come out to the Miller Theatre on the first Saturday evening in June and help us celebrate.”

The Accordion Kings & Queens Festival is funded in part by the Board of Texas Folklife, the City of Houston through the Miller Theatre Advisory Board, Houston Endowment, Hohner Inc., Texas Commission on the Arts, the Raven Grill, the Houston Press and KPFT 90.1 FM. Additional support is provided by Hacienda Records, South Central Music Source, and the City of Austin through the Cultural Arts Division, and by a grant from the Texas Commission on the Arts and an award from the National Endowment for the Arts, which believes that a great nation deserves great art.

Texas Folklife is a statewide non-profit organization dedicated to presenting and preserving the diverse cultures and living heritage of the Lone Star State. For 32 years, Texas Folklife has honored cultural traditions passed down within communities, explored their importance in contemporary society, and celebrated them by providing accessible and joyful arts experiences.

The Miller Outdoor Theatre is located just south of downtown Houston, near the museum district and the Houston Medical Center in Hermann Park. The address is 6000 Hermann Park Drive in Hermann Park, Houston, Texas, 77030. For more information contact (281) 373-3386 or