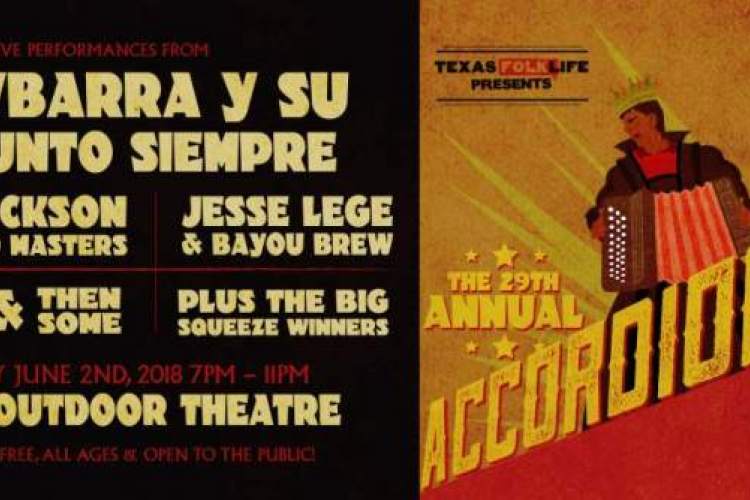 Free Concert to be held at Houston’s Miller Outdoor Theatre on Saturday, June 2

Austin, Texas – April 11, 2018 – Texas Folklife will bring its annual celebration of the state’s accordion roots music to Houston’s Miller Outdoor Theatre on Saturday, June 2, from 7:00-11:00 p.m. In keeping with its mission to preserve and present Texas’s diverse musical heritage, the concert will feature Texas accordion music legends in polka, Cajun, zydeco, and conjunto. This year’s accordion stars will include the 2017 National Endowment for the Arts National Heritage Fellow Eva Ybarra and her band Conjunto Siempre, Keyun Dickson & The Zydeco Masters, JesseLége& Bayou Brew, Czech & Then Some, and the recently crowned 2018 Big Squeeze Accordion Contest Champs.

Writers and radio hosts Joe Nick Patoski and Tony Diaz return again as the emcees. The concert is free and open to the public.

This is a ticketed event for the covered seating area in the pavilion. Free tickets are available (while they last) at the Miller Outdoor Theatre box office the day of the event (4 tickets per person) from 10:30 a.m.-1:00 p.m. If any tickets remain at 1:00 p.m., the box office will re-open one hour before show time to distribute the remaining tickets. As always, there will be open seating on the hill behind the pavilion.

The best way to receive free, assigned covered seating for Accordion Kings & Queens 2018 is to be or become a Texas Folklife member by noon on Saturday, June 2. Contact Texas Folklife to request (up to 4 tickets) seats in the covered seating area. Tickets will be held at the Texas Folklife Information Will Call Table the day of the event from 5:00 p.m. until 6:55 p.m., and then released if not claimed. To become a member or renew your membership: http://www.texasfolklife.org/info/membership.

Eva Ybarra
Eva Ybarra the undisputed “Queen of the Accordion” (La Reina del Acordeón) became a National Endowment for the Arts Heritage Fellow in 2017, after a lifetime of performing music. She is one of only a few professional women accordionists in conjunto music, and has been a star from an early age when she began performing in her hometown of San Antonio. She and her band Conjunto Siempre have produced numerous recordings. In addition to being a professional musician, Ybarra is also a music educator. She has taught in colleges across the country, participated as a master teaching artist in Texas Folklife’s Apprenticeship Program, and currently fosters the development of young conjunto players by teaching at the Guadalupe Cultural Arts Center in San Antonio. She has been inducted into many Halls of Fame, including the Tejano Conjunto Music Hall of Fame and Museum and has won many awards, including the South Texas Conjunto Association Lifetime Achievement Award. Ybarra returns to the stage at Texas Folklife’s Accordion Kings & Queens for the first time since 2010 as an NEA Heritage Award Fellow, our nation’s highest honor for folk and traditional artists.

Keyun Dickson was the first zydeco Grand Prize Winner for Texas Folklife’s Big Squeeze Accordion Contest in 2010. He hails from Humble, Texas, in the greater Houston area and has been playing the accordion and wowing audiences from an early age. His mother and grandmother were instrumental in his musicianship, which started when he picked up an accordion at the age of 3. At the ripe age of 12, he formed his band Keyun & The Zydeco Masters and they perform all over the Greater Houston and East Texas regions of the state.

Jesse Lége is one of the most admired accordionists and vocalists from Southwest Louisiana. He has been playing a variety of Cajun music for over 40 years. He has recorded five CDs, and has garnered numerous Cajun French Music Association awards, known as the “Cajun Grammys,” and has been inducted into the Cajun Music Hall of Fame. In 2017 he participated as a Master Artist in Texas Folklife’s Apprenticeship Program, and is serving as a judge for the 2018 Big Squeeze Accordion Contest.  He will perform with members of Bayou Brew (Darren Wallace on fiddle, Missy Roser on fiddle and vocals, Evelyn Schneider on bass, Erica Weiss on rhythm guitar and vocals, and Keith Garovoy on drums and vocal).

Hailing from Ennis, Texas, one of the hotbeds of Texas Czech culture, Czech & Then Some has been playing music together since January 1997. The majority of the band’s members are of Czech descent and enjoy keeping their Czech Heritage alive. They play a variety of music consisting of polkas, waltzes, country music, and fun dances.  Czech & Then Some has performed at many functions such as National Polka Festival in Ennis, Westfest, Accordion Kings in Stephenville, Six Flags Over Texas for the Texas Heritage Festival, Oktoberfest in Fredericksburg, Praha Picnic, Kolache Christmas, weddings, anniversaries, parties, and has appeared on the Good Morning Texas show on WFAA Channel 8 ABC and Good Day Morning Show on Fox 4. They are active as event organizers and performers in the Texas Czech community statewide and have released six albums.

“Our 29thannual Accordion Kings & Queens concert in Houston will be one for the record books”, said Executive Director Charlie Lockwood. “We are headlining with THE Accordion Queen, the incredible Eva Ybarra. And we are bringing Kings and Queens of all genres of accordion-based roots music to the stage: polka, conjunto, Cajun, and zydeco. Don’t miss out on this opportunity to enjoy this spectacular show for free and show your appreciation for these dynamite groups’ musicianship as well as show your support for the young squeezeboxers—Texas Folklife’s new Big Squeeze Champs—who will join these fabulous stars on the stage. We are grateful to the musicians, our sponsors and partners, and to the City of Houston and the Miller Outdoor Theatre for its long support and collaboration.”

Accordion Kings & Queens is supported in part by the Board and Members of Texas Folklife, the City of Houston through the Miller Theatre Advisory Board, Texas Polka News, Hohner, Inc., a grant from the Texas Commission on the Arts and an award from the National Endowment for the Arts, which believes that a great nation deserves great art, the Raven Grill, KPFT, and the Houston Press. Additional support is provided by South Central Music Source and the Cultural Arts Division of the City of Austin Economic Development Department.