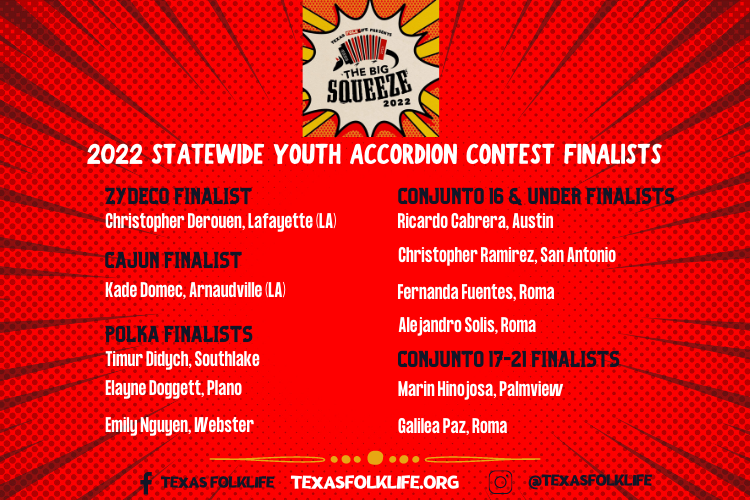 AUSTIN — The championship round of the 16th annual Big Squeeze Youth Accordion Contest, featuring talented young accordion players from across Texas, returns to the Bullock Museum at 1 p.m. on Saturday,  May 14, after being held online for the last two years. The event is free and open to the public.

“The accordion is central to the living musical heritage of Texas,” said Texas Folklife Executive Director  Charlie Lockwood. “We are proud to showcase the talent and dedication of the next generation of Texas accordionists representing diverse communities from across Texas. After two years of online virtual events,  we are excited to gather again in person to cheer on all of the Big Squeeze finalists!”

Then this year’s finalists will compete live in the categories Polka, Cajun, Zydeco, and two Conjunto categories: ages 16 and under and ages 17-21. The elder Conjunto contestants will vie for the Anthony  Ortiz, Jr. Grand Prize, named for a former contest finalist who passed away in 2017.

“We are all so excited to be able to return to in-person events for the Big Squeeze with the Conjunto Semi-Finals and upcoming Contest Finals and Concert,” said Program Director Sarah Rucker, “and we hope  folks from all over the state can join us for this celebration of great traditional accordion music.”

With the largest number of contestants, the Conjunto group went through a semi-final round of judging on  April 23 at the Museum of South Texas History in Edinburg. The following semi-finalists were chosen to move onto the Finals:

Conjunto Finalists: 16 and Under

The following contestants have been chosen to advance in the other categories:

Each of the day’s five champions will receive a cash prize, a new Hohner accordion valued at more than $1,500, performance opportunities with Texas Folklife, publicity, professional development, and other opportunities.

The Big Squeeze is presented by Texas Folklife as part of its mission to preserve and present Texas’  diverse cultural heritage. Since 2007, Texas Folklife has promoted Texas accordion music genres through the Big Squeeze program. More than 300 young, talented players from dozens of Texas communities have participated in the program, which supports these vital community-based accordion music traditions. The  2022 Big Squeeze is produced by Program Director Sarah Rucker, who has been involved with the program since its inception and returns this year.

The 2022 Big Squeeze is supported in part by the generosity of H-E-B, a Squeezebox Legend Sponsor,  who has contributed to worthy causes through Texas and Mexico for 115 years. We also are grateful to the City of Houston through the Miller Theatre Advisory Board for their long-time support. This project is made possible in part by a grant from the Texas Music Office, Office of the Governor, as well as contributions from Hohner Accordions, Texas Commission on the Arts, City of Austin Cultural Arts Division, and other regional partners.

Texas Folklife (TXF) is a statewide non-profit organization dedicated to presenting and preserving the diverse cultures and living heritage of the Lone Star State. TXF is designated by the National Endowment for the Arts as the official folk and traditional arts organization for the state. Since 1984, TXF has honored traditions passed down within communities, explored the importance of traditional arts in contemporary society, and celebrated the state’s vibrant heritage by providing arts experiences enjoyable for all generations. For more information, visit texasfolklife.org.