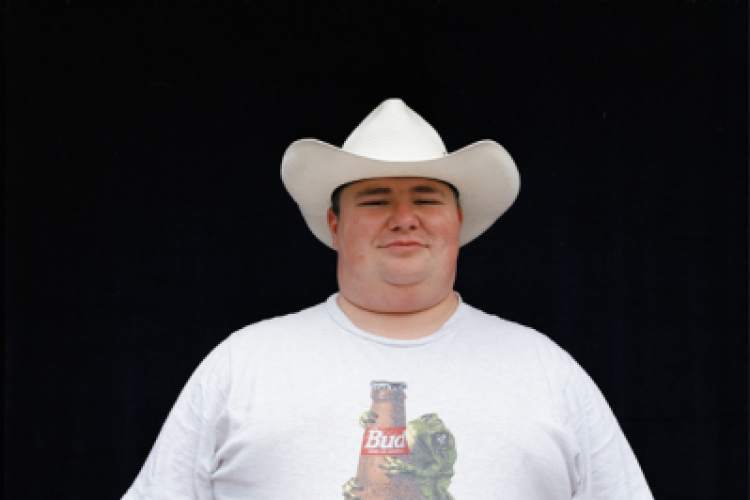 Austin, Texas – December 19, 2016 – In an exhibit opening on January 12, 2017, Texas Folklife will present the contemporary photography of visual anthropologist and documentarian Eric O’Connell. The exhibit will feature portraits of individuals from the former East Germany who have adopted and adapted aspects of the American West’s cowboy mystique into their identity.

During trips to Germany from 2003-2016, O’Connell photographed these self-constructed cowboys, cowgirls, as well as their gatherings at rodeos, dance halls, saloons, and saddleries. According to O’Connell, who is currently an assistant professor of photography and photojournalism at Northern Arizona University, the idea of the cowboy and the American West took hold in the former East Germany when it was separated by The Wall from West Germany and the rest of the Western world (1961-1989). The West represented freedom and individualism. Even after The Wall was torn down (1989), and communism was replaced by capitalism and unification with West Germany, the cowboy remained an iconic symbol because it came to represent a non-materialist, rural life and an attachment to the land.

The exhibit will display approximately 50-60 photographs, including many of the stunning portraits O’Connell took with each individual against a black background, photographs of cowboy gatherings, and photographs of the pastoral landscape in this region of Germany. A short documentary film produced in 2016 will also be part of this exhibit.

The exhibit opening on Thursday, January 12, from 6:00-8:00 p.m. is free and open to the public. The artist will be on hand to discuss his work. Light refreshments will be served and beer and wine will be available for donation.

“We are starting 2017 with the kind of exhibit I want to bring to Texas Folklife,” said Executive Director Charlie Lockwood. “Eric O’Connell’s photographs of the unique cowboy culture he documented in the former East Germany are examples of visual anthropology at its best. The photographs are visually arresting and the context is steeped in meaning. O’Connell’s work helps us understand how people embrace and reinterpret icons, symbols, and cultural values in fascinating ways.”

Parking for the event is available in Texas Folklife's gravel driveway, on the street immediately in front of building, and Asterra Properties (located next door). Overflow parking is available at Recycled Reads (5335 Burnet Rd). Please use spaces in the back or on the south side of the Recycled Reads building.

This exhibit opening event is supported in part by the German-Texan Heritage Society, the Texas Commission on the Arts, and the Cultural Arts Division of the City of Austin Economic Development Department.

Photographs available: Some on view here:

Please let me know if you would like a checklist and/or photographs for publication.