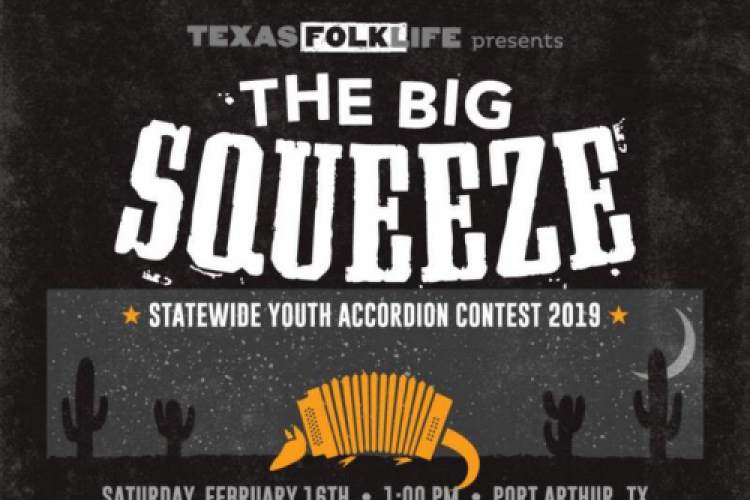 Feb 8, 2019
TEXAS FOLKLIFE AND THE BIG SQUEEZE TO HOST CAJUN YOUTH ACCORDION
WORKSHOP AND CONCERT IN PORT ARTHUR SAT. FEB. 16 2019
Free Workshops and Performances by Accordion Masters and Big Squeeze Winners
to be Held at Museum of the Gulf Coast

PORT ARTHUR (FEB. 2019) – On Saturday, Feb. 16, Texas Folklife is hosting a Cajun youth accordion workshop and concert at the Museum of the Gulf Coast in Port Arthur, Texas. The program, an initiative created to encourage youth participation in Cajun music, will offer workshops taught by former Big Squeeze winners and local Cajun accordion masters, followed by a live concert featuring former winners of the Big Squeeze, Texas Folklife’s statewide youth accordion competition – which kicks off this month across the state.

The workshop, a first for Texas Folklife, was developed as a direct response to the organization’s 2018 community engagement discussion seeking to better address the decline of youth participation in Southeast Texas Cajun music. Creating an accessible workshop for the public serves as one strategy for encouraging and empowering new generations to carry forth a vital genre of traditional Texas accordion music. The hands-on Cajun workshops will take place in classrooms upstairs at the museum, and will be led by master artists and former Big Squeeze winners, allowing for participants of any skill level to learn from some of the best accordion players in the state. Following the workshop, an hour-long concert will take place on the ground floor at the museum. The events are free and open to the public, however, for attendees 21 and over, a $10 donation is suggested. Participants can reserve their space at the workshop by RSVPing at the link below.

Cajun Youth Accordion Workshops & Concert
All ages and experience levels welcome. Accordions provided, or attendees can bring their own.

Big Squeeze Talent Showcases
The Big Squeeze programming begins Feb. 9 and culminates on May 11 with a festive live concert featuring the statewide finalists at the Big Squeeze Finals and Concert at the Bullock Texas State History Museum in Austin, Texas. Four final grand prizewinners will be selected from the traditional Texas accordion music genres: polka; Cajun and zydeco; and two conjunto prizewinners – one for ages 17 and under and one for ages 18-21. The schedule is as follows:

The Big Squeeze competition is open to players aged 25 years and younger in the polka category and 21 years and younger in all other categories. Interested players can reserve a showcase slot by contacting Texas Folklife. Those who live further than 20 miles from the showcase locations may also mail or e-mail their entries to arrive at Texas Folklife no later than April 15th.

SPONSORSHIP
The Big Squeeze offers a variety of opportunities for individuals and organizations to become sponsors of this distinguished program. For more information on becoming a Big Squeeze Sponsor, visit texasfolklife.org/bigsqueeze2019 or call 512-441-9255.

This program is made possible in part by support from the members and board of Texas Folklife, grants from the Southeast Texas Arts Council, Texas Commission on the Arts with an award from the National Endowment for the Arts, which believes that a great nation deserves great art, H-E-B, and generous support from Hohner Accordions, Music Water, Cajun Sounds Internet Radio, the Cajun French Music Association, and the Museum of the Gulf Coast.

ABOUT TEXAS FOLKLIFE
Texas Folklife (TXF) is a statewide non-profit organization dedicated to presenting and preserving the diverse cultures and living heritage of the Lone Star State. TXF is designated by the National Endowment for the Arts as the official folk and traditional arts organization for the state.  Since 1984, the TXF has honored traditions passed down within communities, explored the importance of traditional arts in contemporary society and celebrated the state’s vibrant heritage by providing arts experiences enjoyable and accessible for all generations. For more information, visit www.texasfolklife.org.