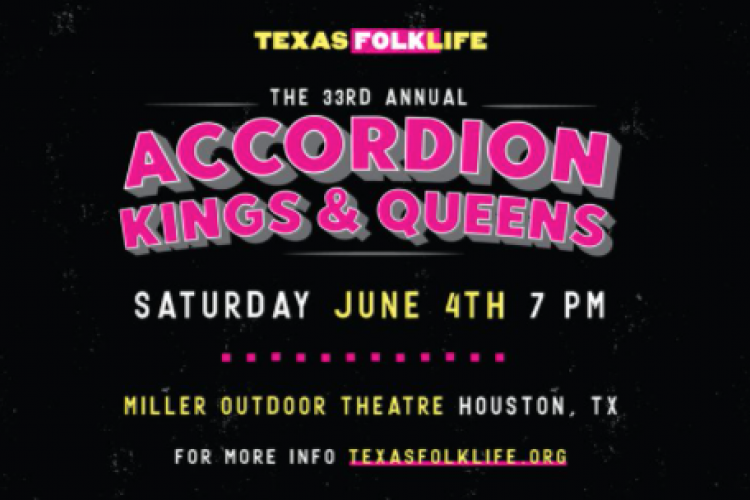 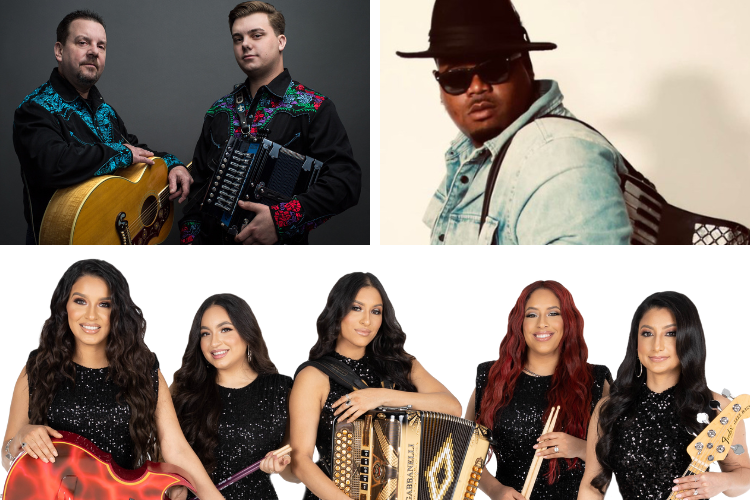 MAY 9, 2022 – On Saturday, June 4, Texas Folklife will host the 33rd annual Accordion Kings & Queens concert at Houston’s Miller Outdoor Theatre from 7-10 p.m. The show will simultaneously be live streamed via Facebook. The free live event features a lineup of the best in Texas accordion music genres, including Norteño, Zydeco, Cajun and more. 2022 performers include Houston based Norteño superstars Las Fenix, Zydeco act RJ & Kreole Smoove, Grammy nominated Cameron Dupuy & the Cajun Troubadours and Texas Folklife’s 2022 Big Squeeze champions in Conjunto, Zydeco, Polka and Cajun categories. Tickets for advanced assigned seating are available now by becoming a Texas Folklife member or free tickets will be available on a first-come-first-served basis at the Miller Outdoor Theatre website and box office the day before the performance at 10:00am.

Since 1990, Accordion Kings and Queens has showcased the musical diversity of Texas accordion styles, featuring the music royalty of conjunto, polka, country western, zydeco, Cajun and more. The vibrant showcase draws thousands of music fans to Houston's Miller Outdoor Theatre to dance and enjoy roots music each year and returns to the first Saturday in June after two years of modifications to timing and lineup. The 2022 concert will feature a lineup of celebrated musicians including:

Las Fenix: Consisting of five sisters from Houston, Texas, this Norteño phenom has been on the rise and recently released their latest single Diganle just last year.

The Big Squeeze 2022 Champions: This year’s winners from Texas Folkife’s statewide youth accordion contest in genre categories of Polka, Cajun, Zydeco and Conjunto will perform alongside this year’s lineup of seasoned musicians.

To raise funds and awareness for Texas Folklife and Accordion Kings & Queens, Texas Folklife is also hosting a Silent Auction & Benefit in Houston on Saturday, May 21 from 4 -6 p.m. at Axelrad Beer Garden. The event will feature a performance by Houston group, GoatLeather, and tickets can be purchased here. The auction site will launch on May 14th for early bidding and stay open until the end of the benefit on May 21. Silent auction bidders do not need to attend the in-person event to participate.

“We couldn’t be more excited to return with a full lineup to our traditional June time frame.” said Texas Folklife Executive Director Charlie Lockwood. “Thanks to our sponsors and partners, and to the City of Houston and the Miller Outdoor Theatre for keeping this longstanding Houston-area celebration of Texas accordion music going. We hope you will join us on June 4th for Accordion Kings & Queens both on stage and live streaming!”

For those planning to attend the live event, both covered and outdoor seating will be available. Covered seats will require a free digital ticket, which are available now to Texas Folklife members before the general public. For more information, visit: https://texasfolklife.org/akq2022.

For those planning to watch from home, catch the livestream at:

Assigned seating can be reserved in advance with Texas Folklife membership until May 31 or free general admission tickets can be reserved by the general public through the Miller Outdoor Theatre’s website starting June 3. Ticket information can be found here.

Accordion Kings & Queens has showcased the extraordinary accordion music of Texas at Houston’s Miller Outdoor Theatre since 1990. The event celebrates the cultural diversity of Texas by bringing communities together for an evening of dancing and roots music played on the accordion. Accordion Kings and Queens is supported by the Board and Members of Texas Folklife and the City of Houston through the Miller Theatre Advisory Board. Additional sponsorships and support provided by AARP Texas, Hohner Accordions, Raven Grill, CenterPoint Energy, and others.

Texas Folklife (TXF) is a statewide non-profit organization dedicated to presenting and preserving the diverse cultures and living heritage of the Lone Star State. TXF is designated by the National Endowment for the Arts as the official folk and traditional arts organization for the state. Since 1984, TXF has honored traditions passed down within communities, explored the importance of traditional arts in contemporary society, and celebrated the state’s vibrant heritage by providing arts experiences enjoyable for all generations. For more information, visit http://www.texasfolklife.org.