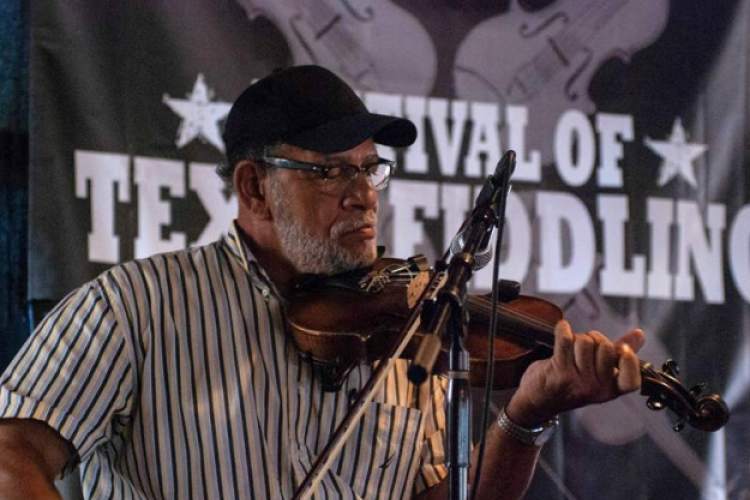 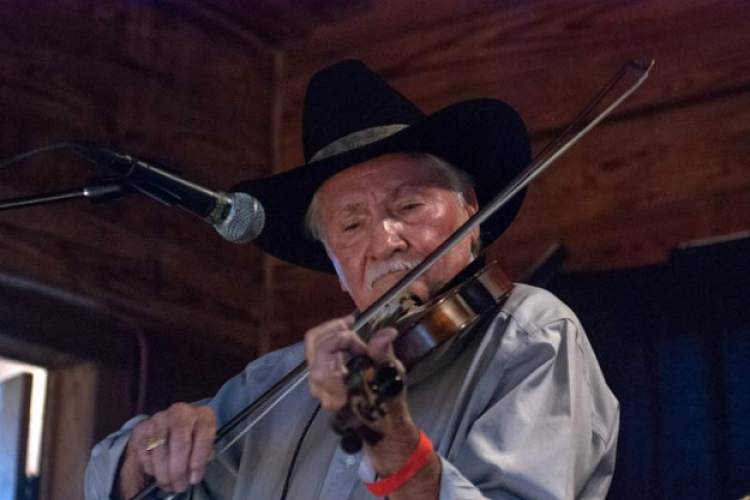 For more Festival information, visit our webpage at http://thefestivaloftexasfiddling.com or Texas Folklife at www.texasfolklife.org

THE 4th Annual FESTIVAL OF TEXAS FIDDLING Announces the

San Antonio, TX – December 6, 2018 – The Festival of Texas Fiddling is proud to announce the winners of the 2018 Texas Master Fiddler Awards. Two awards were given to master fiddlers who as performers and torchbearers have tirelessly preserved and shared their genres of Texas traditional fiddling. Jesse Mears of Alvarado won the award for his mastery of classic Texas contest style fiddling and strong influence on the style across the state. Ed Poullard of Beaumont won the award for his singular accomplishments as a fiddler in the Creole tradition.

In addition to being named “Masters of Texas Fiddling,” Mr. Mears and Mr. Poullard each received a handmade custom belt buckle.

Jesse W. Mears was born in 1939 into a significant and highly regarded fiddling family. Garnering attention for his fast and superb fiddling, Mr. Mears early joined the ranks of legendary fiddlers like the Franklin family (Major, Ray, Royce, Louis, and Larry) and Norman and Vernon Solomon, and he was a regular winner of contests at places like Athens, Gilmer, Hallettsville, De Leon, Crocket, Gatesville, Bowie, and the Pioneer and Old Settlers Reunion in Alvarado. Backed by the superb Kathy McVicker, Jesse has brought his fiddling across the state. He has recorded studio projects like his 1982 “Family Tradition” album, and his 2006 CD, “Done and Gone Fiddlin”. He has played in a variety of bands such as Rambling Rhythm, the Country Westerners, the Southlanders, and Jesse Mears and Fiddlin’ Fever, and has also encouraged a taught a rising generation of young fiddlers. Jesse Mears truly stands among the most significant fiddlers in the history of the state.

Ed Poullard plays a unique a captivating style of fiddling he learned from his musical family, with accordion players on both sides. Mr. Poullard’s first instrument was the accordion, which he still plays to this day on instruments that he builds himself. When he switched to playing his grandfather’s fiddle, Mr. Poullard soon emerged as a significant player of Creole music, a vibrant but lesser known music related to Cajun music. Poullard’s style and repertoire developed out of a long apprenticeship with legendary Creole fiddler Canray Fontenot. Poullard turned to fiddling and soon has been internationally recognized playing a unique variety of Creole music. Ed Poullard has the unique stature of being both an apprentice with Canray Fontenot and then a master artist in Texas Folklife's statewide Apprenticeship Program.  He has recorded numerous albums, including several put out by Arhoolie Records. Today, Mr. Poullard is regarded rightly as the most significant Creole fiddler and accordionist, and he has brought his music very far and wide from Texas without ever losing his deep connection to the region’s music.

“It’s an honor to be able to award the 2018 Master Texas Fiddler awards to truly significant tradition bearers like Jesse Mears and Ed Poullard,” said Dan Margolies, Artistic Director and one of the founders of the Festival of Texas Fiddling.  “Both of these fiddlers tap into the true vine of Texas fiddling in wonderfully unique ways, and both have inspired and influenced legions of other fiddlers across the state. The Festival of Texas Fiddling is happy to recognize and celebrate their profound accomplishments.”

The 4th Annual Festival of Texas Fiddling, co-sponsored by Texas Folklife, presented all styles of Texas fiddling and featured all-day dancing in historic Twin Sisters Dance Hall in Blanco, Texas, on December 1, 2018. The Festival also featured workshops on fiddling and rhythm styles and a fiddle symposium sponsored by Humanities Texas.

Texas has the most diverse fiddle traditions of any state. Along with all that fiddling comes some of the best dance traditions anywhere.  The Festival of Texas Fiddling is the first and only festival that brings all of the great traditions of fiddling in the state together in a truly historic Texas dance hall.

For more Festival information, visit our webpage at http://thefestivaloftexasfiddling.com or Texas Folklife at www.texasfolklife.org