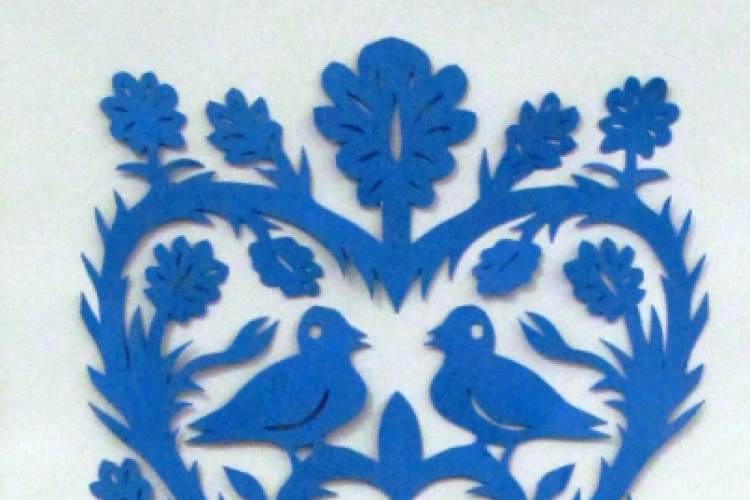 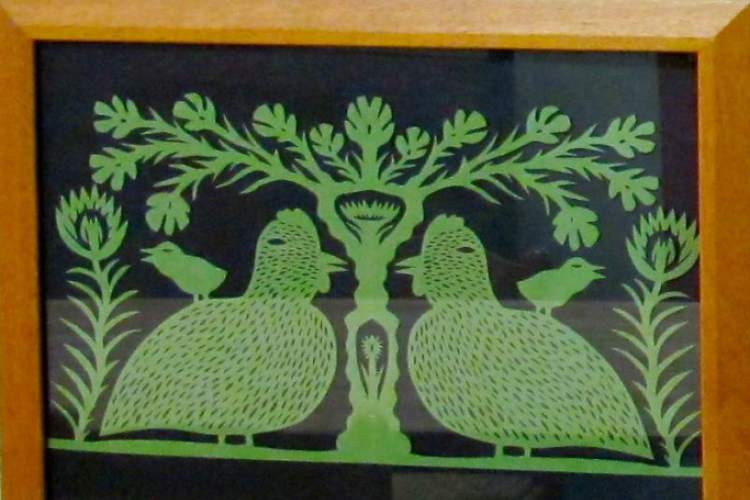 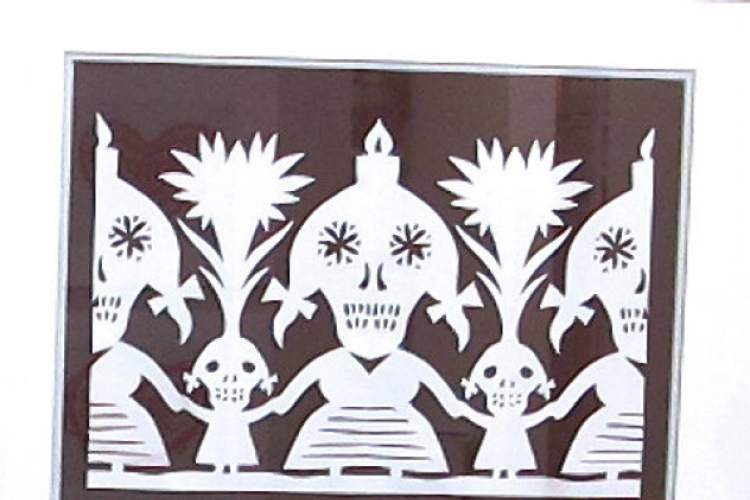 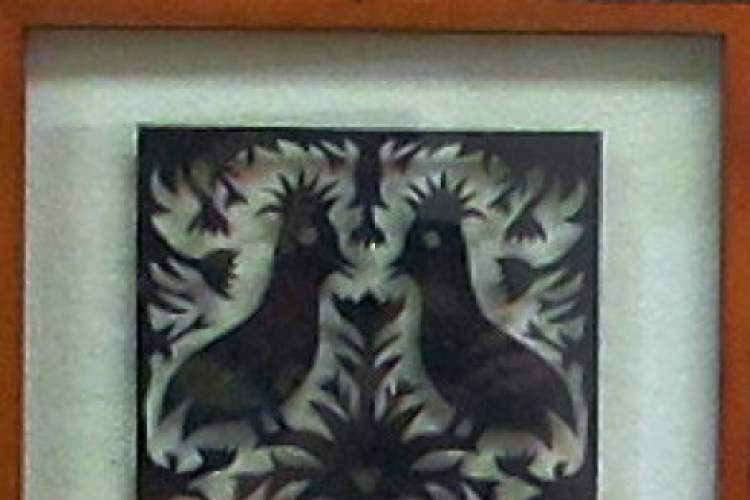 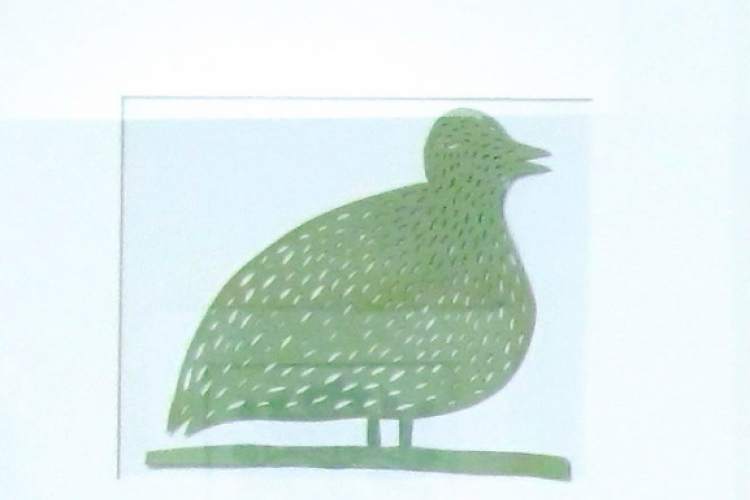 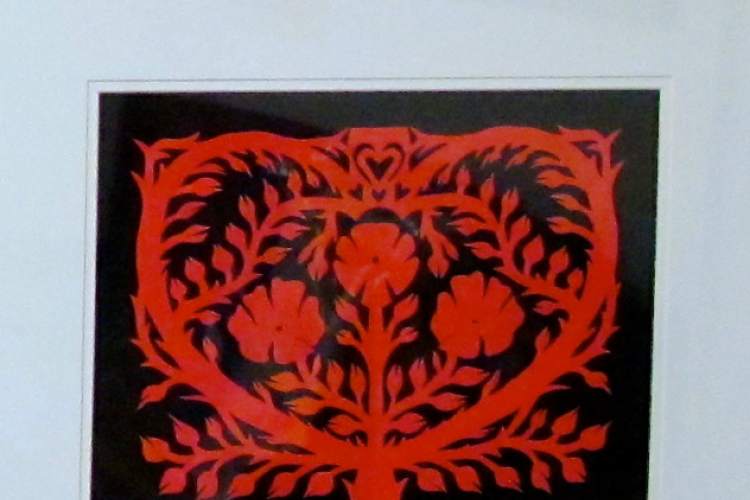 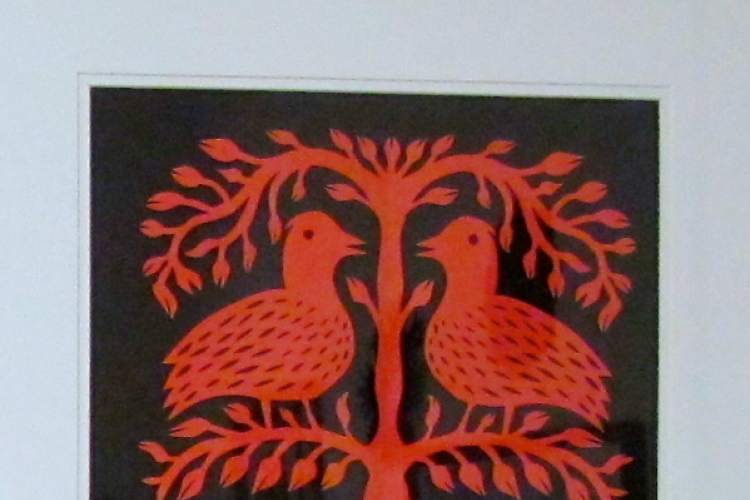 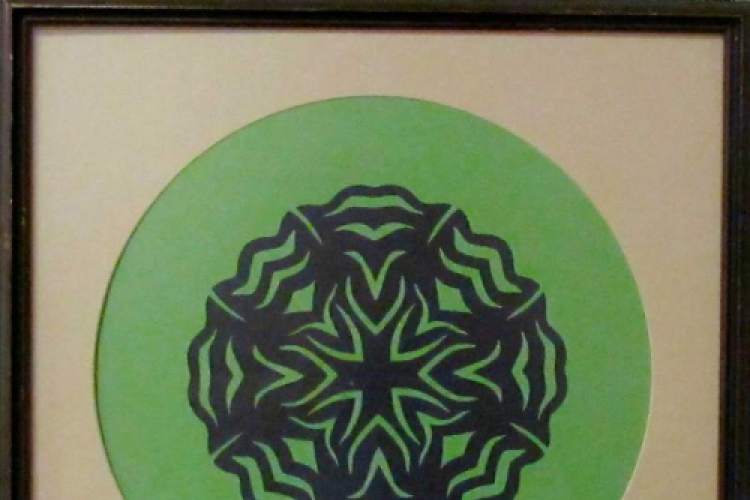 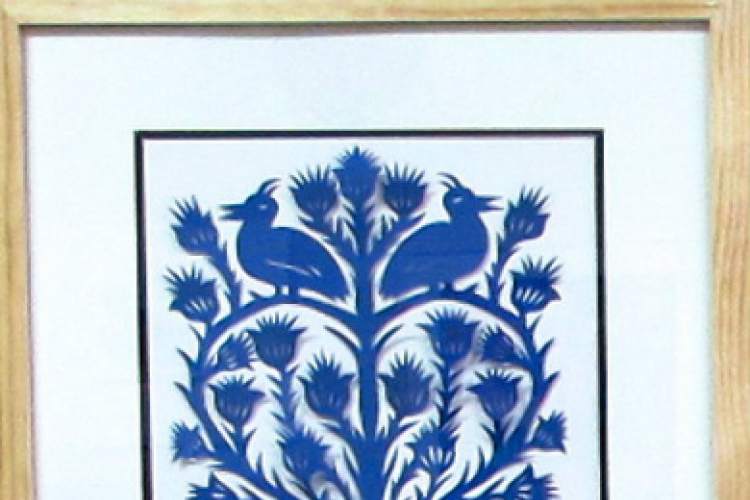 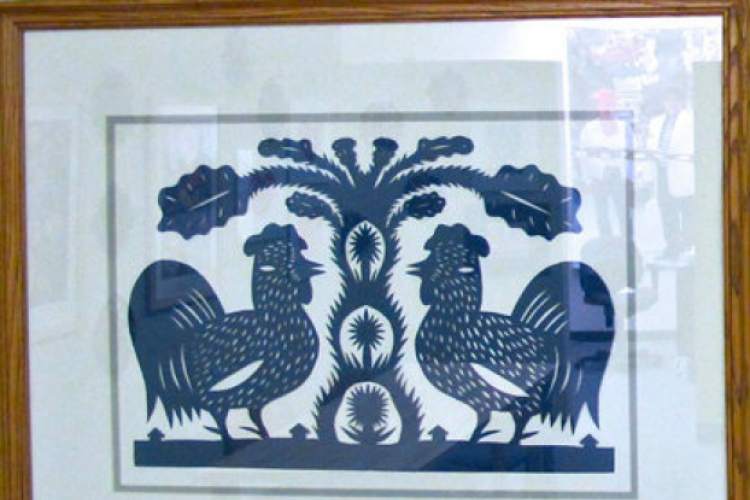 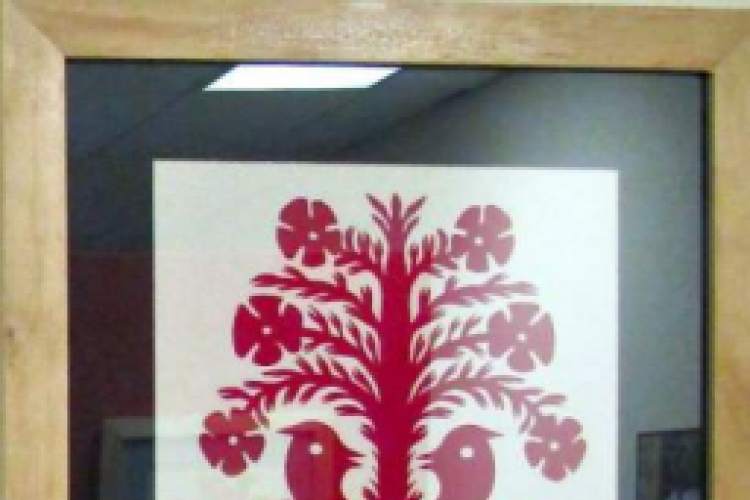 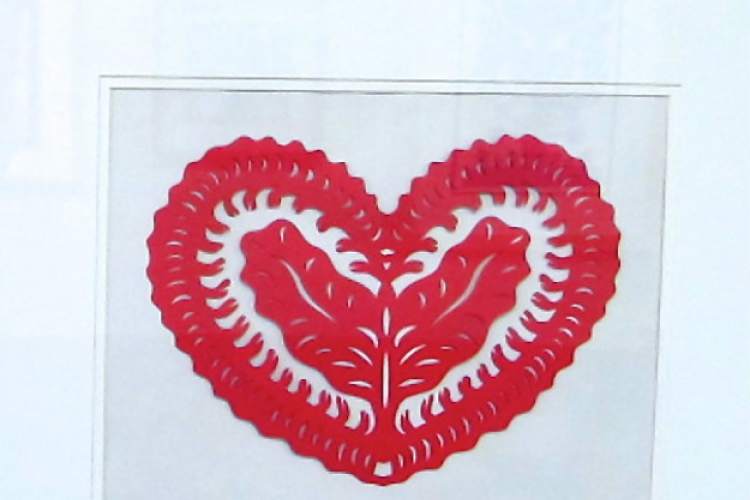 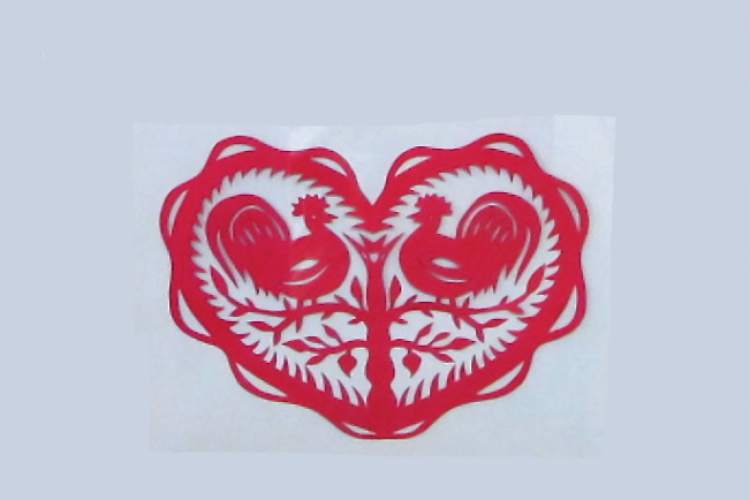 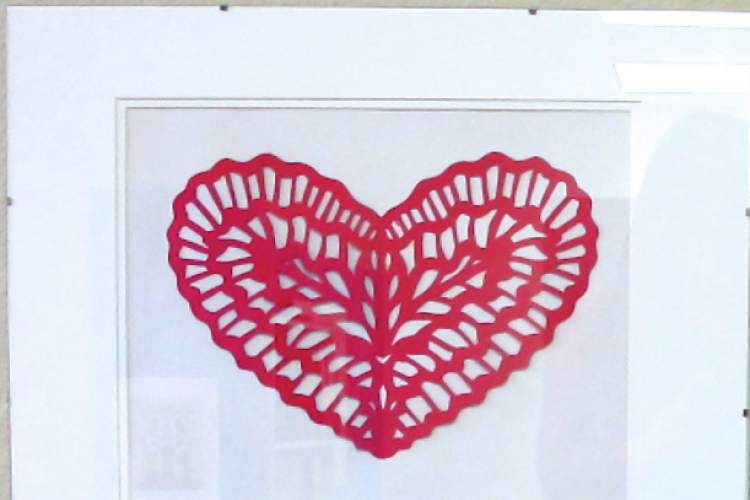 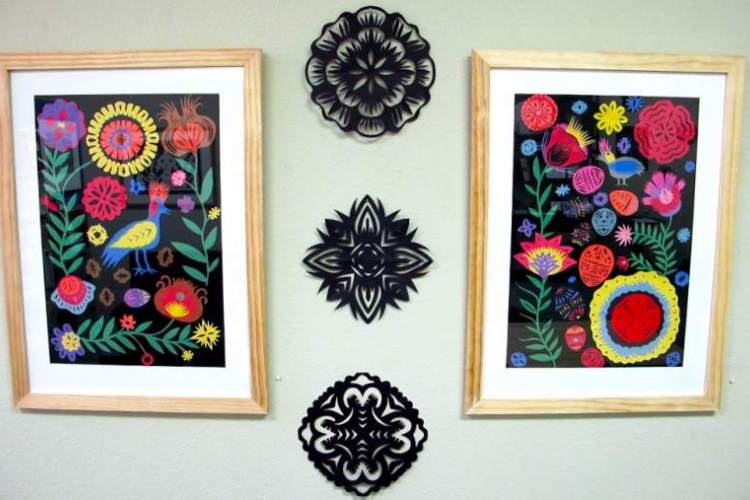 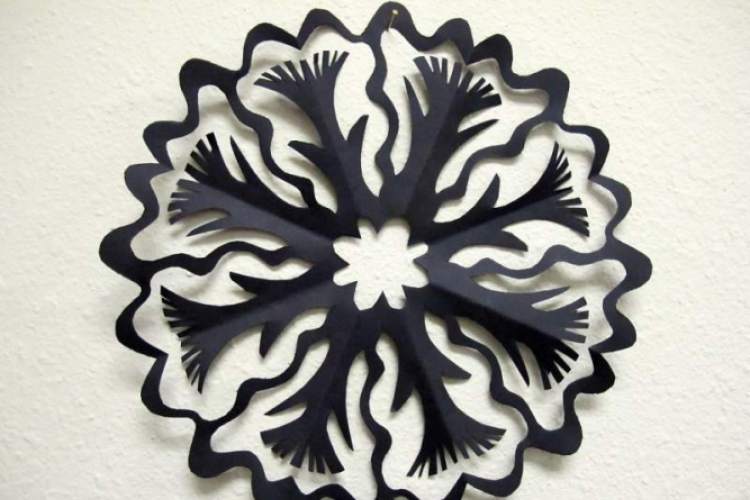 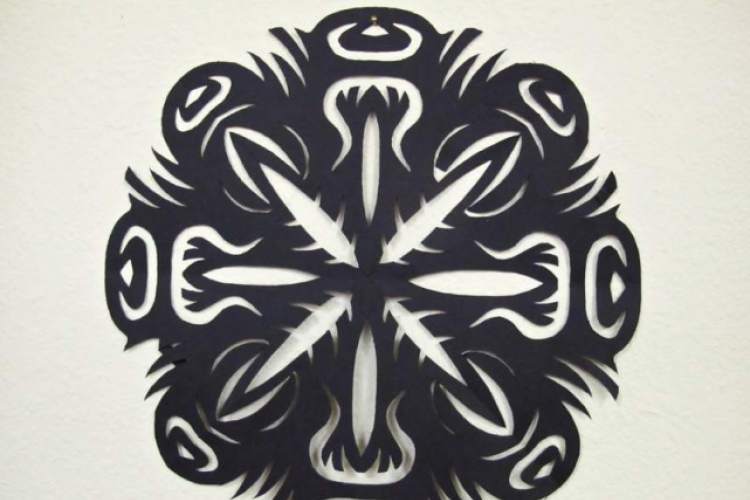 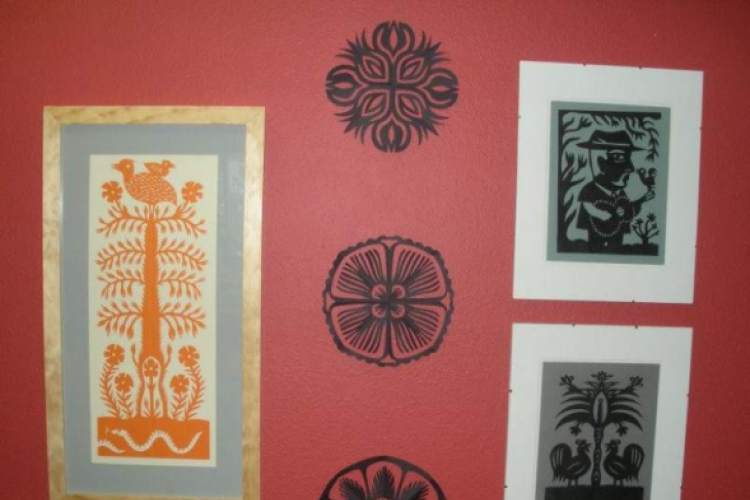 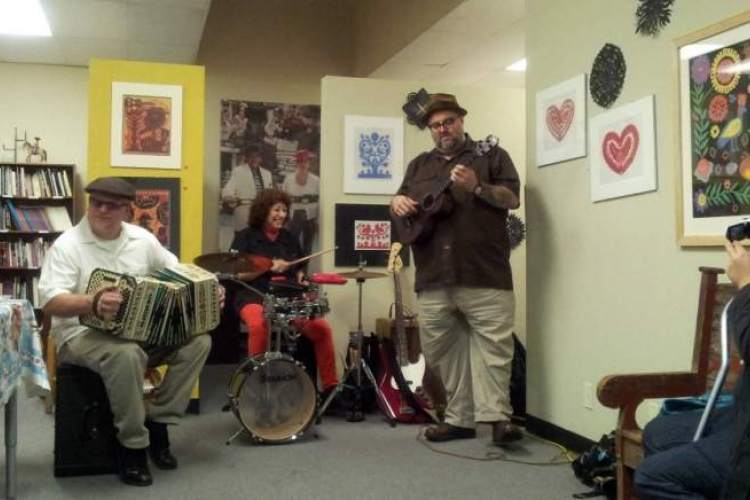 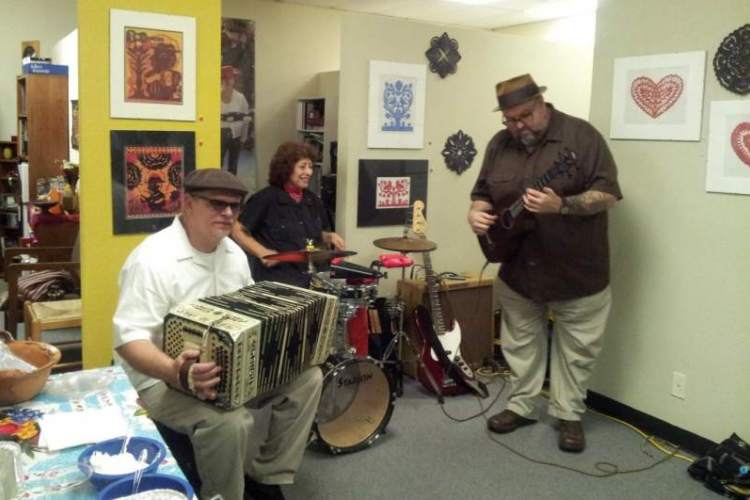 But what if it plays the bajo quinto (the big acoustic guitar of conjunto music), has a Welsh last name, sings in a Cajun band, and hails from Saginaw, Michigan?

In that case, it’s Bradley Jaye Williams. One of the most versatile musicians in Austin, Williams over the last four years has unleashed another creative talent. He’s been making decorative papercuts known as wycinanki, a handcraft popularized more than a century ago in Poland. With scissors, an X-Acto knife and folded paper, Williams finds himself returning to the visual arts, an interest since early childhood, and, as with his band the Fabulous Polkasonics, exploring the Polish half of his ancestry.

Williams’s maternal grandparents Szumila immigrated to the United States and settled Detroit in 1910. His grandfather worked for the Ford Motor Company there some 20 years, before moving the family north to Posen, Michigan, near northern Lake Huron.

“They came here with whole other ideas of what they wanted, of creating a new life, a brand new life,” says Williams. Nonetheless, the Szumilas remained devout Catholics and continued to speak Polish at home; Williams’s grandfather distilled his own vodka and was known to sing the Polish national anthem.

Bradley Jaye Williams was born in 1961, the youngest of five children.  His father was of Welsh and Irish ancestry, and at least during Bradley’s childhood, the family’s Polish heritage seems to have moved underground. Yet art and music (cabbage rolls and sausage, too) have ways of overriding intention. The obereks, polkas and waltzes from the Old Country that infused New World communities from tiny Posen to teeming Detroit, seeped into his Saginaw home too. He remembers listening to, among others, Marion Lush and Walter “L’il Wally” Jagiello, two kings of Chicago polka, on the extended family’s records and tapes, out of jukeboxes and over the radio.

Like children in most parts of the country, Williams scissored paper snowflakes and handmade Valentines. His own mother was a quilter. But he doesn’t remember papercut art as part of local or family heritage. He does recall being praised for his artistic skills. He would draw during free time at school and take on craft projects at home alongside his mother, Victoria. After graduating from high school, he attended Delta College in Saginaw, studying design, then moved to California, settling near San Francisco with the hopes of becoming a commercial artist.

It was in the Bay Area that Williams picked up his first accordion and was drawn into the Cajun and conjunto music scenes.  He found the participatory core of these ethnic musics magnetic and has devoted his own gifts since to purveying these and other styles of roots music. Since moving to Austin in 1993, as well as playing with the Polkasonics and his Cajun group, the Gulf Coast Playboys, Williams performs with Conjunto Los Pinkys and Susan Torres and Conjunto Clemencia.

“The music that I like to play is dance music,” says Williams. “You have to have a crowd there. Everybody participates in the good time. And it’s an exchange, an exchange of energy. The musicians make music, and the people dance to the sounds, and you feel that. I don’t think I would get that same kind of feeling if I was just up there playing a guitar and singing a song about my feelings.”

Searching for such exchange, Williams found encouragement soon after trying his hand at wycinanki. The Internet provided both a wealth of inspiring examples and a conduit for quick feedback. His Facebook page has elicited praise from people in the Ukraine and Belarus,  (homelands of kindred papercutting traditions). But Williams’s work has fans in Turkey and India too. (The Facebook page also drew the attention of Texas Folklife director Cristina Balli and set in motion this exhibit, Williams’s first wycinanki show, December 2013-February 2014 at the Texas Folklife Gallery)

Wycinanki’s international appeal makes sense. Paper ornamented with holes, slices and other incised decoration is a folk art practice across the world, e.g. Chinese jianzhi and Mexican papel picado. As with his musical eclecticism, Williams has borrowed liberally from many traditions. He’s worked with elegant Japanese kirigami papers and, in several early pieces, featured handholding skeletons, inspired by the Day of the Dead.

Peter Gessner, director of the Polish studies program at State University of New York, Buffalo, writes that the folk craft of papercutting came to Eastern Europe in the 1600s and first gained popularity in Jewish communities. These delicate pieces often commemorated marriages or, embellished with verses from the Torah, supplanted the use of costlier stone or metal plaques in synagogues.

Some sources contend that early Polish papercuts were made by idle shepherds, who used shears to make ornaments of tree bark and sheepskin. (Reading the lore of wycinanki’s origins, Williams went so far as to buy some sheep shears and attempt making decorative cutouts with them – about as easy as playing a waltz on a saw.)

In the 19th century, as dyed papers became more widely available, wycinanki proliferated.  Gessner writes that, in the houses of Polish peasants, the bold, repetitive patterns of wycinanki elaborated an older practice of decorative stenciling. “Long horizontal designs would be frequently affixed to the exposed ceiling beams. Another favorite location was near the top of a wall, just below the ceiling. Large, complex cut-outs representing scenes from daily life, weddings or holidays were placed on doors.”

In Williams’s borrowing from books and online sources, he has gravitated toward several of the most enduring wycinanki motifs. What he calls “mandalas” -- black, circular and doililike -- are known as Gwiazda in Poland, a form most identified with the Lowicz region.

Also from Lowicz are the multicolored Kodra. In these pieces, often quite large, the cutouts are ample, leaving room to paste other colored shapes and figures. Williams’s Texas Folklife show includes several such works, notably two large pieces matted in black, with pastings of paper peacocks, decorated eggs, leaves and flowers: cornucopias of Polish folk motifs.

The Kurpie region is best known for Leluia wycinanki; paper is folded over just once so the cutouts form a mirror image, often in the shape of a tree. Some of Williams’s most ambitious pieces, “trees of life” where roosters perch and snakes wind below, are strongly reminiscent of Leluia.

In the spirit of folk art, so much of which has been made by “anonymous,” Williams doesn’t sign his pieces. “I continue that tradition with my own stuff. I don’t want to sign it. I think it kind of makes it look ugly if you put your name on it. They’re so perfect as they are.”

Williams has given many of his papercuts away, to his mother and to a maternal aunt (keeper of the family’s Polish flame), and to fellow conjunto musicians Susan Torres and Isidro Samilpa. Signing such gifts would be strangely cold, like signing a Valentine.

One early wycinanka, featuring a foursome of Polish musicians, Williams gave to fiddler Brian Marshall, who’s been at the forefront of a Polish cultural renaissance in Texas. Another early papercut, inspired by El Dia de los Muertos, went to friend and fellow musician Mark Rubin.

It was Rubin, a true folklife polymath, who found an authentic Polish wycinanka in an antique store on Lamar Boulevard in Austin and gave it to Williams in 2013.

“It really worked a number of him,” says Rubin. Looking at the evolution of his friend’s papercuts, Rubin says, “You can draw a line in the sand” from the time Williams received this intricate, homegrown wycinanka, clearly made by a skilled practitioner. Over the past year, Williams’s papercuts have become more ambitious: larger, more detailed, with a wider range of figures.

Traditionally, wycinanki were an ephemeral art form. As Gessner writes, they “were made to be used, and when the walls were whitewashed anew each spring, the old wycinanki were thrown out and new ones were made.”

Williams has framed some of his own pieces but many others simply dangle on the wall. ”That’s part of the tradition too,” he says. “Although some of it is meant to last and is beautiful, a majority of it is throw away. When it’s spent, it gets dull or gets torn, you know, you throw ‘em away.” Hung up with pins, casting their patterned shadows, the flat wycinanki take on a vibrant third dimension.

Despite (or perhaps because of) three decades’ immersion in traditional cultures, Williams is reluctant to lay absolute claim to any ethnic heritage. He is enraptured by folk forms but wary of brandishing them. Bradley Jaye Williams’s approach to papercutting – as with his music --  “goes beyond any kind of singular nationality. And as much as I would love to promote Polish culture and everything, I may not be the guy to do that, you know.“