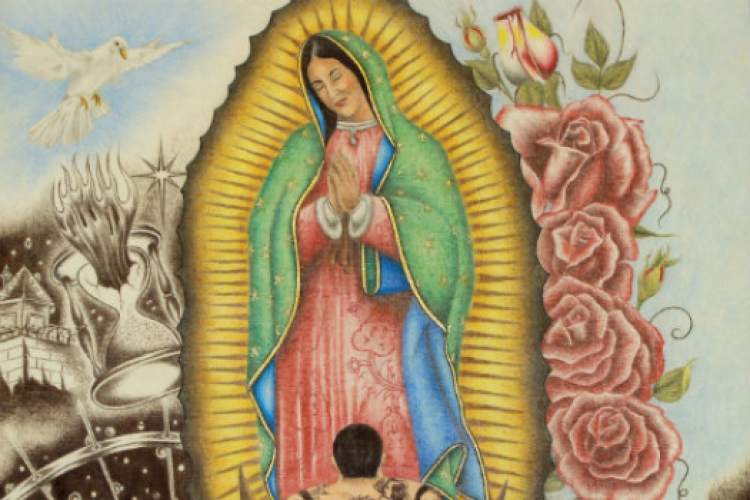 Paños or pañuelos - Spanish for “cloths” or “handkerchiefs” - are a popular form of Chicano prison art with handkerchiefs and occasionally pillow cases or bedsheets used as the canvas for imaginative drawings of the artist’s lifestyles before prison. Aztec figures, Disney characters, women, and the ever-popular Virgen de Guadalupe are popular subjects of drawings with ballpoint pens often highlighted with colored pencils or whatever supplies may be at hand. They are highly detailed and complex illustrations that tell the inmate’s story or his visions in art rather than words. As the art form becomes more popular it has also become more sophisticated; the talent inherent in many of the inmates has resulted in highly detailed renderings with folk art collectors, galleries and museums now collecting and featuring this work. The paño art collection of artist and collector Ed Jordan will on display at the Texas Folklife gallery. Jordan began collecting paños after teaching art at Blinn College's auxiliary campus at the federal prison in Bastrop, Texas. Jordan is a collector of Mexican folk art and a long-time member of Austin Friends of Folk Art. “Paños/Pañuelos from Prison” will be on display at the Texas Folklife Gallery from August 1 through October 25, 2013. There will be a reception and talk with collector Ed Jordan on August 18, 2013 - 2:00-4:00 PM. The public is invited to this free event.