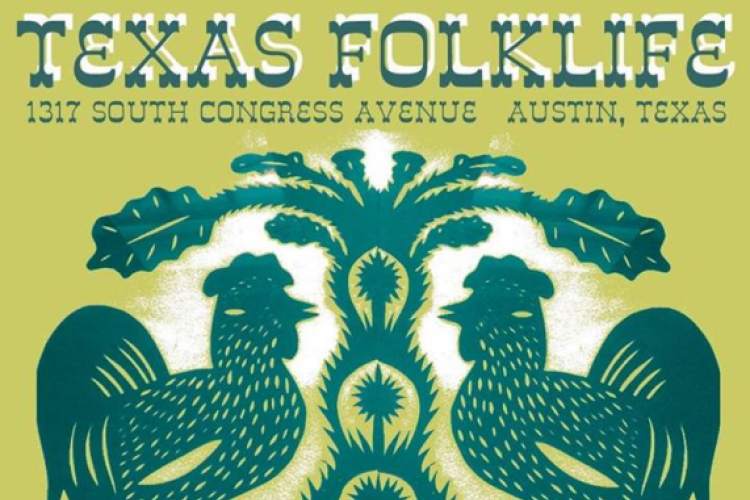 Texas Folklife's newest exhibit will feature cut paper art by artist and musician Bradley Jaye Williams. Williams creates cutpaper designs that draw inspiration from many paper cutting traditions around the world. Traditional imagery of birds, roosters, hens, trees of life, stars, flowers and beehives are mized with folk musicians, accordions, bajo sextos, and fiddles. "The inspiration for my designs come from many far away places and traditions that are also very close to home," says Williams, an Austin native of 21 years. Raised in Saginaw, Michigan, Williams was immersed in his Polish-American artistic heritage since a young age. He remembers doing papercut art beginning in Kindergarten and in the last three years has taken a wider and deeper interest in the folk art form. "My work contains elements of Polish wycinanki, Japanese kirigami, Jewish, German and Swiss sherrenschnitte and Mexican papel picado." In Texas, Williams is best known for his music, having recently been featured in KLRU's "Arts in Context" episode, "Tardeadas." The story of Los Pinkys is featured in this video where Williams serves as the galvanizing force for traditional Conjunto legends from Austin, accordionists Chencho Flores and Isidro Samilpa, where they play a weekly gig in east Austin's White Horse Pub. Williams plays bajo sexto for Los Pinkys but is a long-time traditional musician. He began singing and playing trumpet at the age of nine, but it was as a young adult in California that he began performing with a folk rock group which embraced all types of traditional music - Cajun, Tex-Mex, and Polka. Williams moved to Texas where he has continued his musical and artistic career, which includes graphic design. "Papercuts" will feature new work by Williams and favorites from various collections including large and small framed works, mandalas, multi-folkfed, free-form and digital poser designs using cut paper components. Art will be available for sale. Exhibit reception and holiday party will be held on December 4, 2013 at 6:00 PM, at the Texas Folklife Gallery located at 1317 S. Congress Street in Austin (back entrance on Circle Street, between the Continental Club and Botticelli's Restaurant.) Exhibit will be on display between November 7, 2013 and February 28, 2014. Gallery hours are 11:00 AM to 5:00 PM Monday through Friday.
This is a:
Texas Folklife Event