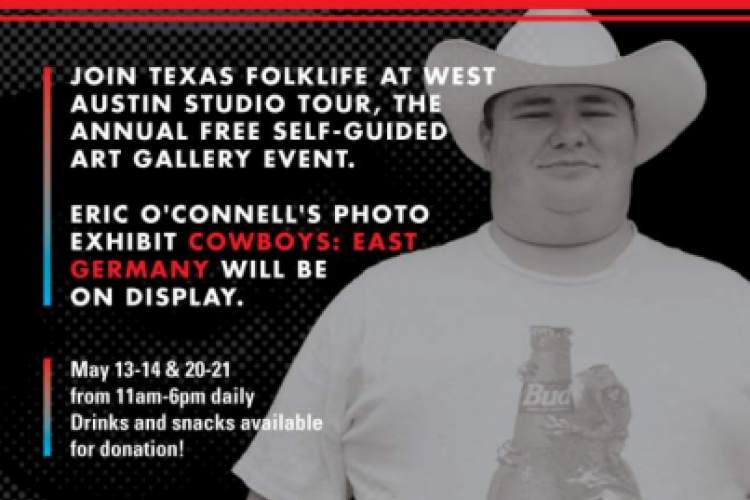 Texas Folklife is excited to announce our participation in Big Medium's West Austin Studio Tour 2017! Our current exhibit Cowboys: East Germany will be on display throughout West. Join us at our gallery May 13-14 and 20-21st.  Drinks and snacks will be available for donation throughout the day, with happy hour  drinks from 4pm-6pm each day of the tour.

Big Medium's West Austin Studio Tour (West) is a free, annual, self-guided art event spanning across two weekends in May. West provides opportunities for the public to meet the local artists and artisans of Austin in their creative spaces.

This year, we celebrate the 6th edition of West.

West is a program of Big Medium, a non-profit organization dedicated to championing and cultivating artists and the contemporary arts in Austin and across Texas. Through our programs and partnerships, we are working to foster the arts and facilitate an inclusive cultural dialogue between artists and their communities.

About the Exhibit, by Eric O’Connell:

Cowboys: East Germany examines the constructed identities and practices of the American Western Cowboy and “cowboy lifestyle” as taken up and lived by the people of the former East Germany. From 1961 to 1989, The Wall, separates East Germany, the Deutsches Democratic Republic (DDR) from West Germany and on a global scale, physically demarcating the Cold War’s boundary separating the Communist East from the Capitalist West. Developing behind “The Wall,” the idea of Cowboy represents a type of freedom and individualism for East Germans, as imagined in the lifestyle of the cowboy. Emerging from the shadows of Communism, the adopted – and well-adapted – cowboy lifestyle re-imagines the cowboy ethos as agency to hold on to what is seen as good from Communism and eschew perceived ills of Capitalism. Values the East German cowboys wish to retain and “bring over” from their communist past – like helping one’s neighbor, a non-materialist rural life, family values, and attachment to the land and working with animals – are reinterpreted as “cowboy” values from an imagined American West.

In this series, which is part of a broader collection of portraits, documentary images and a documentary film, I began with an older view camera, 4x5, similar to cameras that have been used to document the American frontier. Later, in 2016, with digital resolutions matching that of 4x5 film, a digital camera was used. Both formats reveal the rich details, with which the cowboys authenticate and construct their identities. Documented as found, whether at a rodeo, other event, or at their homes, they present themselves as they are for the camera. Isolated from the environment, against black, the photo invites inspection and consideration of dress as part of constructed identity. In addition to a visual tool, the black background, isolating the subject, stands as a metaphor suggesting many of the subject’s experiences behind The Wall, and isolation from the West.

Eric O’Connell is an Assistant Professor of photography and photojournalism at Northern Arizona University, holds an MA in visual anthropology (USC, 2010), and has worked and lived in New York City and Los Angeles as a commercial photographer for nearly 20 years. Having grown up in a ranching family in New Mexico, he is not only uniquely positioned to look at this subculture, but invested in this subject matter, as a matter of personal, and fond experience.

This exhibit was made possible in part by support from The German Texas Heritage Society, The Texas Commission on the Arts with an award from the National Endowment for the Arts, the Cultural Arts Division of the City of Austin Economic Development Department, and Frank, purveyors of fine sausage.  Exhibition is courtesy The Wittliff Collections, Texas State University.

Parking Information:
Parking for the event is available in Texas Folklife's gravel driveway, on street immediately in front of building, and Asterra Properties (located next door). Overflow parking available at Recycled Reads (5335 Burnet Rd). Please use spaces in the back or on the south side of the Recycled Reads building.