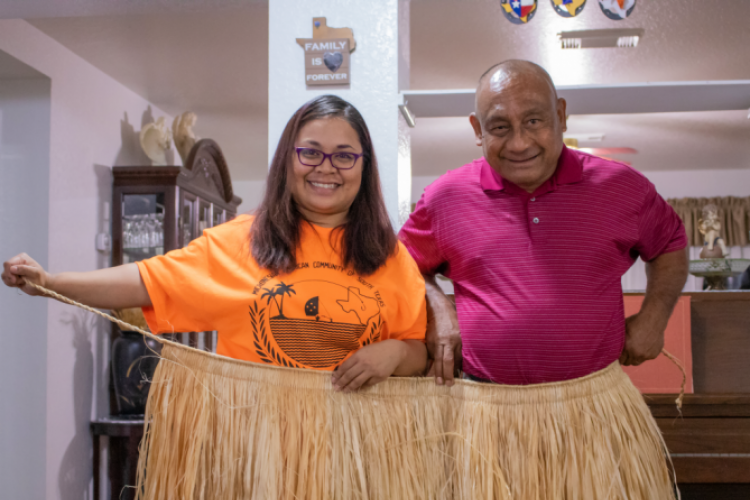 Early in 2019 Sabrina Yakana participated in the Texas Folklife Apprenticeship Program. She learned the traditional art of Pingelapese stick dance from master artist Sepir Yakana, a dance previously done to train hand eye coordination for warriors entering into battle. Now, however, the dance serves as a way to entertain. Sepir grew up on the Island of Pingelap in the state of Pohnpei, part of the Federated States of Micronesia. Starting at the age of nine, he has performed stick dance for nearly 51 years, and is able to perform the extremely difficult task of reciting all four chants and their associated movements simultaneously. Retiring from the U.S. Army and settling in San Antonio, Sepir is one of, if not the sole, practitioners of the art form in Texas. He chose to participate in the Apprenticeship Program to preserve and pass on this culture to others in the Micronesian community. "Through stick dance, it makes them know who they are," Sepir said. "It’s like you’re finding yourself when you look back." Sabrina was born in Pohnpei but moved to the US when she was five-years-old. While growing up primarily doing hula dancing, listening to and watching her brothers learn stick dancing got her interested early in the tradition. Before the apprenticeship she had been involved in the dance for 20 years, starting at 15 but only knowing half of the dance, reflecting the years of dedication required. Sabrina chose to participate in the program as way to learn and perform all four chants and associated dances. She has also started to teach her son, representing three generations of the Yakana family learning the tradition. “We all want to be connected with someone, especially in a world filled with identity crisis," Sabrina said. "To belong to a group, a family, and to know this will be something that you do makes a difference.”