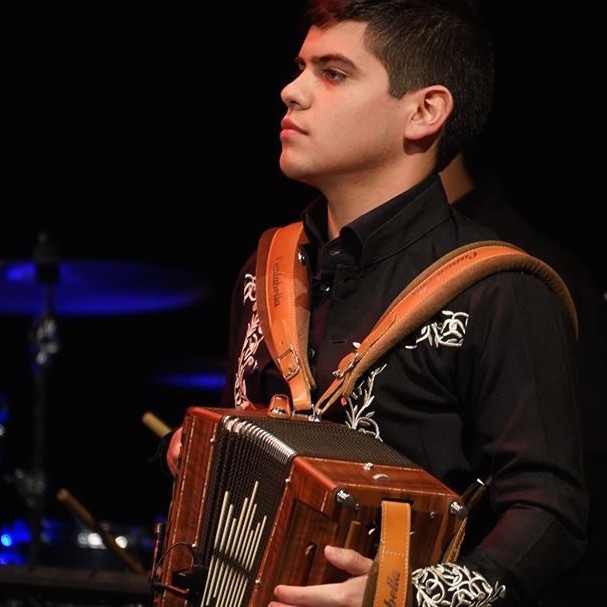 Musical youth from across the Lone Star State are proving that even during a pandemic, the show must go on! Texas Folklife is bringing the Conjunto Semi-Finals of its youth accordion competition, the Big Squeeze, to Facebook live on Saturday, April 17, along with a concert by Rio Grande Valley-based band Conteño.

This is the 15th year of the Big Squeeze. Since 2007, more than 300 young, talented players from dozens of Texas communities have competed for prizes across several categories like conjunto, polka, Cajun, and zydeco. The semi-final round on April 17 is for the conjunto competition, which has the largest number of participants. Finalists will be announced in two age groups: 16 and under, and 17 to 21. The Grand champion prize for the Conjunto ages 17-21 category is named the Anthony Ortiz Jr. Prize in honor of a former Big Squeeze finalist, friend and professional musician who passed away in 2017.

The Conjunto Semi-Finals From Home will be held on Saturday, April 17 at 3 p.m. CDT at: http://www.facebook.com/texasfolklife. The broadcast, produced in collaboration with the Museum of South Texas History in Edinburg, will last about an hour. Up to 12 semi-finalists in the conjunto category, whom judges will have chosen a few days before, will be recognized and spotlighted during the event. The show will include a 30-minute concert from Conteño. Hailing from Brownsville, the six-piece band blends the sounds they grew up with on the Texas-Mexico border, including conjunto, Tejano, and Norteño.
It features Juan Longoria, Jr., Texas Folklife’s first Big Squeeze champion from 2007.

For the finale, the conjunto finalists for the 2021 Big Squeeze will be revealed. These finalists will take part in the Big Squeeze finals on May 8, along with finalists in polka, Cajun, and zydeco.

“Through the Big Squeeze, Texas Folklife provides an outlet for young people to carry on cultural traditions,” said program director Sarah Rucker, “and to celebrate the fact that they decided to pick up an accordion — it’s not an easy instrument to play!"

“We want to give a spotlight to these up-and-coming musicians,” she added, “and also help give them a platform to learn more about the music business and to learn how to present themselves in a performance space.”

This competition usually includes live events held all around the state, but the COVID-19 pandemic has forced a change. This year, the entire competition is being held virtually. “This event has always been about community, connection, and love for the music,” Rucker said. “That’s why it’s so hard not being together in person this year. But Texas Folklife’s top priority is to keep people safe and healthy.”

The upside is that the program will be broadcast to the world, she added. The 2020 Big Squeeze Finals, the first ever held on Facebook Live, had “a beautiful turnout online, and a much bigger audience than we usually have, and the sense of community remained,” Rucker said. Viewers from many states and even other countries tuned in.

The 2021 Big Squeeze is supported by funding and donations from the board and members of Texas Folklife, Texas Commission on the Arts, the Cultural Arts Division of the City of Austin Economic Development Department, H-E-B, and the City of Houston through the Miller Theatre Advisory Board and
Hohner Accordions. Additional support is provided by regional partners.

ABOUT TEXAS FOLKLIFE
Texas Folklife (TXF) is a statewide non-profit organization dedicated to presenting and preserving the diverse cultures and living heritage of the Lone Star State. TXF is designated by the National Endowment for the Arts as the official folk and traditional arts organization for the state. Since 1984, TXF has honored traditions passed down within communities, explored the importance of traditional arts in contemporary society, and celebrated the state’s vibrant heritage by providing arts experiences enjoyable for all generations. For more information, visit www.texasfolklife.org.