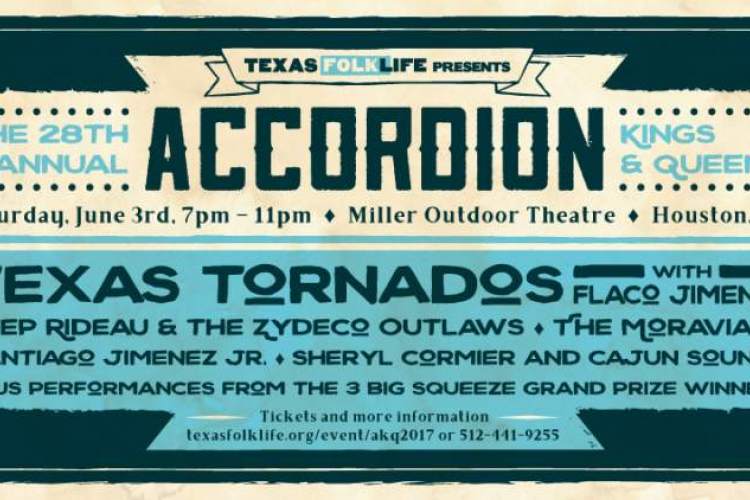 Free Concert to be held at Houston’s Miller Outdoor Theatre on Saturday, June 3

Writers and radio hosts Joe Nick Patoski and Tony Diaz return again as the emcees. The concert is free and open to the public.

There are two seating sections: open seating on the garden lawn and reserved covered seating under the shade of the pavilion.

·       Pick up tickets on the day of the concert at the Miller Box Office. The ticket limit is 4 per person and all are first come, first served.

·      Or, become a member or renew your membership to receive special reserved covered seats and the option to receive your tickets in advance. Memberships begin at $25 for students and seniors and $35 for individuals. Further membership information is available at http://www.texasfolklife.org/info/membership. In addition to supporting the non-profit work of Texas Folklife, during the concert, members will be entered into a raffle.  Raffle prizes will include a brand new Hohner accordion, tickets to the Alley Theatre, an autographed photo of Flaco Jiménez, Texas Folklife merchandise, and more.

The Grammy-winning Texas Tornados have been called the ultimate Tex-Mex super group and can be considered a Texas music All-Star band. The band’s music is a fusion of rock, country, R&B, and various Mexican styles. The initial combination of musicians that formed the Texas Tornados happened almost by chance at a San Francisco concert performance in 1990. The original group was made up of Freddy Fender, Flaco Jiménez, Augie Meyers, and Doug Sahm. They took the title Texas Tornados, after Sahm's song "Texas Tornado.” After the untimely deaths of Sahm (1999) and Fender (2006), the group disbanded for a period of time. The current group includes Tornado original musicians Louie Ortega, Speedy Sparks, Augie Meyers, Flaco Jiménez, and Ernie Durawa, as well as new members Nunie Rubio and Shawn Sahm, Doug Sahm’s son. The new Tornados produced their first album together in 2010, Esta Bueno, which was produced by Shawn Sahm. Grammy-winner and “Greatest Tejano Accordionist Ever” Flaco Jiménez said about the new Tornados sound, “the groove is back,” and it appears to be true.

Santiago Jiménez Jr. has a more traditional accordion style than his brother Flaco, and has won numerous awards during his long career. Just some of his numerous significant achievements: He was honored with a Lifetime Achievement Award in traditional Tex-Mex/folk music in 2000, an NEA Heritage Award in 2000, and in 2015 President Obama awarded him a National Medal of Arts.

Stephen Joseph “Step” Rideau was born in 1966 in the St. Landry Parish town of LeBeau, Louisiana. Surrounded by Creole culture and zydeco music from infancy, it wasn’t until relocating to Houston in the mid-1980s that he began to play the accordion and eventually formed his own band. Today, Step Rideau is widely acknowledged as one of the living masters of the instrument. He’s also established himself over the past two decades, through multiple recordings and festival appearances, as one of the most prolific and passionate zydeco recording artists, songwriters, and live performers across the globe.

Cheryl Cormier is known as the queen of the Cajun accordion. She was one of the first women to break through the sexist restrictions of Louisiana's Cajun music scene. A former leader of an all-woman Cajun band, Cormier is currently the leader of Cajun Sounds, a group that features Isaac Miller, Jr. (steel guitar, vocals), Ben Goodwin (drums), Ivy Dugas (bass) and Travis Matte (fiddle). The oldest of four children, Cormier grew up surrounded by Cajun music. Her father was the leader of the Sunset Playboys, a band that included her mother on drums.

The Moravians are a polka band that hails from Ennis, Texas. The young band came together in 2009 with a group of high school and college students. The band gets its name from the fact that all the members have ancestors who emigrated from Moravia in the Czech Republic to the United States. Although they have only been together a few years, they’ve played at numerous festivals, dances, and events throughout the state.

And keeping with tradition, the Accordion Kings & Queens will be joined onstage by the current Big Squeeze Accordion Contest Champions. Crowned on April 22 in Austin at the Bullock Texas State History Museum after a series of performances and judges opinions, the three 2017 Grand Prize Winners—Donovan Bourque from Beaumont (Cajun/Zydeco), Mason Nesvadba from Guy (Polka), and Luis Gonzalez from Grand Prairie (Conjunto)—will take to the stage and have the opportunity to play with this older generation of Texas musicians who helped pave the way for their accordion dreams.

“The Accordion Kings and Queens Concert is one of the flagship programs of Texas Folklife,” said Executive Director Charlie Lockwood. “The concert honors the ‘national instrument of Texas,’ and the legends and superstars performing Texas roots music across the state in several different genres—polka, Cajun/zydeco, and conjunto. It is our mission to preserve and promote this music, and at our annual Accordion Kings & Queens Concert we bring communities together to celebrate these shared accordion music traditions. Please come out to the Miller Theatre on the first Saturday evening in June, help us celebrate, and wear your dancing shoes and boots!”

The Accordion Kings & Queens Concert is funded in part by the Board and members of Texas Folklife, the City of Houston through the Miller Theatre Advisory Board, Houston Endowment, Hohner Inc., Arena Energy Foundation, and by a grant from the Texas Commission on the Arts with an award from the National Endowment for the Arts, which believes that a great nation deserves great art, the Raven Grill, the Houston Press, and KPFT 90.1 FM. Additional support is provided by South Central Music Source, and the City of Austin through the Cultural Arts Division.

Texas Folklife is a statewide non-profit organization dedicated to presenting and preserving the diverse cultures and living heritage of the Lone Star State. Since 1984, Texas Folklife has honored cultural traditions passed down within communities, explored their importance in contemporary society, and celebrated them by providing accessible and joyful arts experiences.

The Miller Outdoor Theatre is located just south of downtown Houston, near the museum district and the Houston Medical Center in Hermann Park. The address is 6000 Hermann Park Drive in Hermann Park, Houston, Texas, 77030. For more information contact (281) 373-3386 or