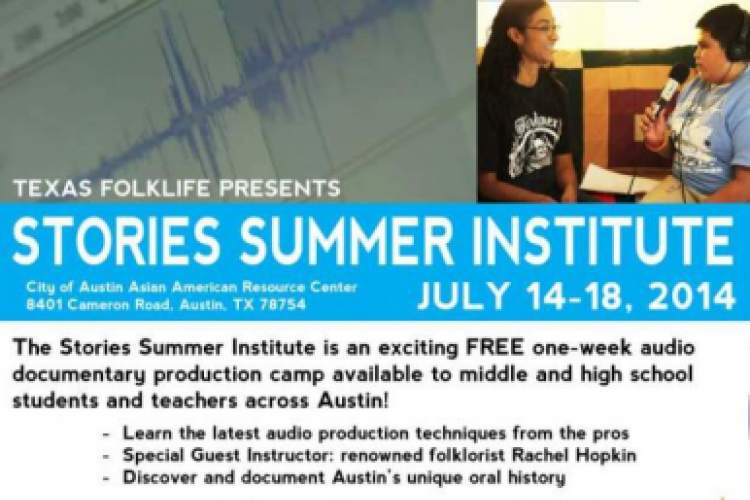 Stories Will be Shared in a Free, Public Presentation on July 18

Austin, Texas – June 9, 2014 – Texas Folklife is pleased to announce the “Stories from Deep in the Heart” 2014 Summer Audio and Folklore Institute to be held July 14 through July 18 in Austin, led by folklorist and radio producer Rachel Hopkin. High school and middle school teachers, administrators, and high school students from Austin ISD and surrounding school districts were selected to be this year’s Institute fellows. Teacher/administrator participants and students enrolled in Title 1 schools will be awarded a stipend to attend the 5-day intensive workshop in audio documentary production. Made possible by a grant from the National Endowment for the Arts, the Texas Folklife program offers workshops to teachers and students throughout the year to document their family and community traditions. Participants have a rare opportunity to learn from some of the best producers, journalists and cultural workers in the nation.

For this year’s Summer Institute Texas Folklfie is partnering with the City of Austin's Asian American Cultural Center facility to document Asian and Asian American community traditions through audio stories.  During past summers, “Stories from Deep in the Heart,” has produced compelling stories from students at Akins, LBJ, Austin, Travis, and Eastside Memorial High Schools as well as Kealing, Gorzycki, and O’Henry Middle Schools. The audio pieces feature a range of stories from Bharata Natyam classical Indian dance, to an intimate look at devotion of La Santa Muerte, a new folk tradition imported from Mexico to Texas, to the story of a family band of female conjunto accordion players. These stories have already attracted national interest through the Public Radio Exchange (PRX) radio distribution channel and have aired nationally on NPR’s Latino USA, and locally on KUT 90.FM, Austin’s NPR affiliate.

Rachel Hopkin is a folklorist and radio producer with 15 years of radio production and ethnographic research experience. After working with the BBC, creating radio documentaries about music from around the UK, she became an independent radio producer and folklorist. Among her many accomplishments Hopkin documented multiple oral history projects in historic communities across the American South, created a Folkloric Radio series for local Kentucky NPR, and was awarded the 2012 Sally Kress Tompkins fellowship from the Society of Architectural Historians and the Historical American Buildings Survey to document buildings in Nashville. Since 2012 she has served as Program Coordinator for Nevada Humanities. Ms. Hopkin will present a sampling of her work as well as completed audio documentaries produced at the Summer Institute by this year’s fellows in a program that is free and open to the public on Friday, July 18 at the Asian American Resource Center. The program begins at 6:00 p.m. with a reception that will include refreshments.

“This project gives voice to the rich world of stories, music, folklore and art contributed by the diverse, hard-working families who have established themselves in Central Texas,” says Cristina Balli, Executive Director of Texas Folklife. "The students and teachers become our field workers—bringing us into their homes and new neighborhoods to learn about their family and community traditions."

“Stories from Deep in the Heart” is supported by the members and Board of Texas Folklife, the City of Austin through the Cultural Arts Division, by grants from the Texas Commission on the Arts, the Shield-Ayres Foundation, the Still Water Foundation, and by an award from the National Endowment for the Arts, which believes that a great nation deserves great art. The public program is co-sponsored by the City of Austin Asian American Resource Center.  Additional support is provided by the Austin Independent School District and KUT 90.5FM.

Texas Folklife is a statewide non-profit organization dedicated to presenting and preserving the diverse cultures and living heritage of the Lone Star State. Celebrating its 30th anniversary in 2014, Texas Folklife has honored the authentic cultural traditions passed down within communities, explored their importance in contemporary society, and celebrated them by providing accessible and joyful arts experiences. It is located in Austin, Texas, in the SoCo neighborhood—one of the city’s vibrant commercial and arts district.