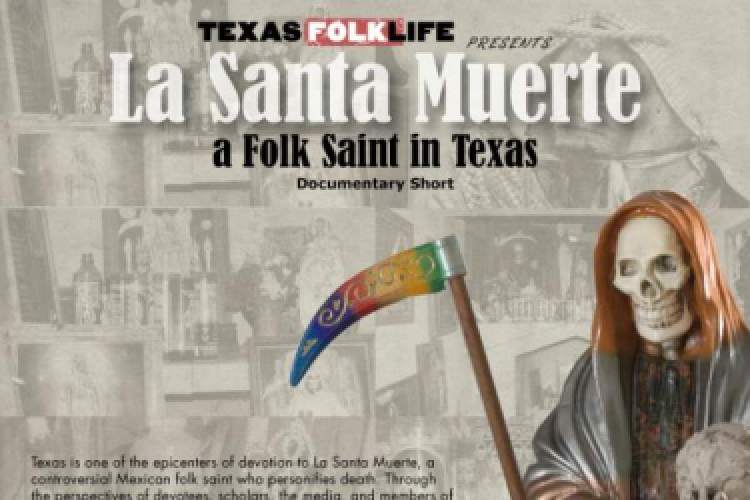 Screenings to be held in Austin, San Antonio, and Virginia this Fall

Austin, Texas – August 17, 2017 – Texas Folklife is releasing a short documentary that explores the popularity of “La Santa Muerte” (“Saint Death” or “Holy Death”). Texas is one of the epicenters of devotion to La Santa Muerte, a controversial Mexican folk saint who personifies death. Through the perspectives of devotees, scholars, the media, and members of the clergy, La Santa Muerte: A Folk Saint in Texas explores the rising presence of Santa Muerte in communities across Texas; from its controversial significance as a folk saint, to its condemnation by the Catholic Church, the impact it has on religious freedom and the place it holds among forbidden female deities.

Film screenings and panel discussions will be held throughout the fall in Texas and Virginia. The film premiere will be a showing in Austin at Santa Cruz Theater on Tuesday, October 3, featuring a panel discussion with scholar Andrew Chesnut and filmmakers. There will also be a showing at the Guadalupe Theater in San Antonio on Thursday, October 5, also featuring a panel discussion with scholars Andrew Chesnut and Malgorzata Oleskiewicz-Peralba. And during the week of October 31 there will be two screenings in Virginia: a screening and discussion with Andrew Chesnut and Texas Folklife Executive Director Charlie Lockwood at the Virginia Commonwealth University in Richmond, sponsored by the School of World Studies; and a screening at Virginia Wesleyan University in Virginia Beach, sponsored by the History Department and The Lighthouse: Center for Exploration & Discovery. More information about the screenings can be found at: http://texasfolklife.org/santamuertefilm

“We are very proud to announce the release of this documentary short about La Santa Muerte,” said Executive Director Charlie Lockwood. “It has taken several years to bring this project to fruition and we are extremely happy with the result. The film tackles an interesting and fascinating cultural phenomenon and tries to get at the underlying reasons for its emergence in today’s world, and its meaning in Texas. In order to explore la Santa Muerte we have brought together scholars, psychologists, religious leaders, and faith healers to help us better understand this folk spiritual practice, its following, and its emergent popularity. We invite you to try and catch one of the screenings this fall.”

Texas Folklife is a statewide non-profit organization dedicated to presenting and preserving the diverse cultures and living heritage of the Lone Star State. Since 1984, Texas Folklife has honored the cultural traditions passed down within communities, explored their importance in contemporary society, and celebrated them by providing accessible and joyful arts experiences.