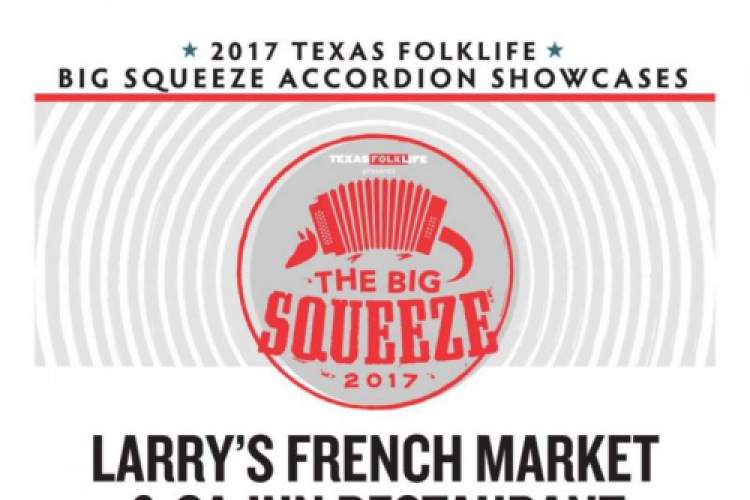 Talent Showcase Highlighting Cajun and Zydeco will be held in Groves on Saturday, March 4

Austin, Texas – February 21, 2017 – Texas Folklife is thrilled to announce that the Big Squeeze Accordion Contest is back in 2017. This will be the 11th year for the Big Squeeze program that supports up-and-coming Texas musicians who are 21 years of age or younger. The contest is one of the ways in which Texas Folklife carries out its mission to preserve and present Texas’s diverse cultural heritage. The contest recruits players in all genres of the Lone Star State’s accordion-based music.

This year, Texas Folklife is hitting the road again and holding Big Squeeze showcases in communities throughout the state to search for young accordion talent. Three Final Grand Prize Winners will be devoted to the three main accordion genres—polka, Cajun/zydeco, and conjunto. The polka genre will include German, Czech, and Polish polka traditions. Cajun/zydeco will include zydeco, Creole and Cajun musical traditions. And conjunto will include conjunto, norteño and Tejano. The showcases will be free and open to the public, and will feature music by established accordion artists as well as showcase the young musicians.

There will be a talent showcase in Groves, Texas, at Larry’s French Market & Cajun Restaurant on Saturday, March 4, from 3:00-5:00 p.m. The event is free and open to the public. This showcase will emphasize Cajun/zydeco, but all interested players are encouraged to reserve a showcase slot by contacting Texas Folklife.

Those wishing to perform should either register online by 2:00 p.m. or should arrive by 2:00 p.m. the day of the showcase. Those players who cannot attend the showcase may mail or e-mail their entries to arrive at Texas Folklife no later than March 31, 2017. The complete contest rules and entry forms are available online atwww.texasfolklife.org/bigsqueeze2017 or by calling (512) 441-9255.

It will be an afternoon of all things Cajun and zydeco! The Masters of Ceremony for the event will be Gloria Roy, owner of Cajun Sounds Internet Radio and ambassador of Cajun heritage and culture, and Texas Folklife’s executive director Charlie Lockwood. Immediately following the showcase, music will be provided by Elizabeth Kelley (2015 Big Squeeze Champ for Cajun/zydeco) and Jude Moreau (2017 Texas Folklife Apprenticeship Program Master Artist) & the Bon Temps Playboys. Then get ready to dance into the night with Jackie Callier & the Cajun Cousins who will perform at Larry’s from 6:00-10:00 p.m. To stay for Jackie Callier & the Cajun Cousins (and be seated on the dance floor) will require a cover charge of $8 per person.

Up to nine finalists (three from each genre) will be selected the week of April 3rd by a panel of judges, and will perform at the Big Squeeze Concert and Finals at the Bullock Museum on Saturday, April 22. At that time, three Grand Prize Winners will be selected. The three Big Squeeze 2017 Grand Prize Winners will receive a prize package valued at more than $4,000, including a cash prize, a brand new Hohner accordion, performance opportunities with Texas Folklife, publicity, professional development, and other professional opportunities. Additionally, the Grand Prize Winners will perform onstage with legendary Texas musicians at Texas Folklife’s Accordion Kings & Queens Concert, held at Houston’s Miller Outdoor Theatre in June.

“Cajun and zydeco are some of the strongest roots of Texas’s vibrant music heritage,” said Executive Director Charlie Lockwood. “We are thrilled to be back in The Golden Triangle area, searching for young players to help support them and keep this music alive and well. The Big Squeeze program enables Texas Folklife to focus on one of our main priorities and our mission—to help foster the continuation of the traditional arts in the state. In this case it is Cajun and zydeco music featuring the accordion, the ‘national instrument of Texas.’”

Texas Folklife is a statewide non-profit organization dedicated to presenting and preserving the diverse cultures and living heritage of the Lone Star State, and is designated by the National Endowment for the Arts as the Folk & Traditional Arts organization for the state. For over 30 years, Texas Folklife has honored cultural traditions passed down within communities, explored their importance in contemporary society, and celebrated them by providing accessible and joyful arts experiences.