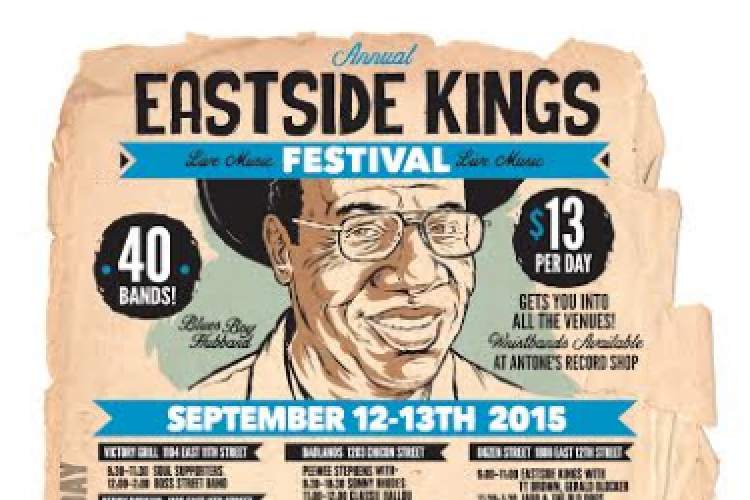 The Eastside Kings Festival set for September 12/13, 2015 is a can't-miss Austin event.  It's about time somebody stepped up to remind the locals that the music Austin is so famous for began in Afro American clubs and juke houses that were located on the East side of town.  Better yet, there are still artists struggling to find gigs around town that were part of building this rich Texas tradition. They have to be heard and seen while they are still here.

For his Third blues Festival, Austin's own record producer, promoter and bass player, Eddie Stout, has teamed up with John Paul DeJoria, one of the founding fathers of the House of Blues and a well-known entrepreneur. They are joined by the non-profit, Texas Folklife, which works to preserve local tradition in the arts. Together, they are committed to giving local blues artists the credit they deserve and audiences a musical education. Featured are musicians that are little known today. Some have been working in music since the 1940s.  These living legends led bands and also backed greats like B.B. King, T-Bone Walker, and Pee Wee Crayton. Stevie Ray and Jimmy Vaughan learned directly from watching and jamming with these local gems. Venues along 11th and 12th Street anchor this festival in a way that an auditorium could never do. This was an area that only booked blues artists, who often would drop in on one another's shows to jam or have a drink.  Walking from one building to another while music drifts from one street corner to another is a reminder of the heyday of Austin blues.

This year, the musicians will include Austin's own Hosea Hargrove, Soul Man Sam & The Brothers, Mac McIntosh and the Eastside Kings and more. In addition, Peewee Stephens, Jewel Brown and Milton Hopkins will make the trip from Houston.  Other performers will include slide master, Sonny Rhodes as well as Classie Ballou, Blues Boy Willie, Ray Sharpe and Birdlegg, who is now touring Europe regularly.