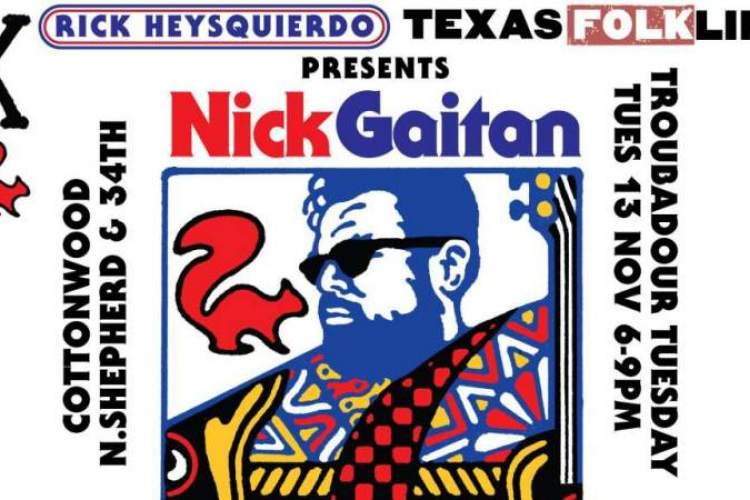 Free with RSVP on Eventbrite!
https://www.eventbrite.com/e/troubadour-tuesday-with-nick-gaitan-tickets-52095347587

Texas Folklife teams up with the Lone Star Jukebox to Co-Host Troubadour Tuesdays in an effort to highlight the Texas Folklife Mission of Preserving & Presenting diverse cultures and the living heritage of The Lone Star State.We'll have some Swag to give away and give you an opportunity to meet Charlie Lockwood the Executive Director of Texas Folklife, and get the chance to become a Member and support their great Mission.From Houston’s Southeast side, Bassist/Songwriter Nick Gaitan grew up in a working class area of the city where to the sounds of Tejano, Country, Swamp Pop, Rock n’ Roll, and Soul all fed into his musical influence from a very young age.From his early days with Los Skarnales, times performing with The Octanes, or years touring with Billy Joe Shaver, Gaitan has played with some of the best in the state and region. With a musical resume like this, it’s hard to corner his playing or style into one genre. This “Gulf Coast gumbo — a mix of roots rock, swamp pop, blues and Tex-Mex Conjunto”, as described by Jim Beal Jr. of The San Antonio Express, is reflected in Gaitan’s original recordingsHis Houston-based band “The Umbrella Man” recorded their self-titled album in 2009 and “Bridges and Bayous” in 2012. A mainstay on the Houston Music scene Since 1999, he has since performed on stages across the USA, Mexico, Canada, Europe, Australia, and South America. Still, as the road goes on forever, something in the song or the sound always brings it back to his hometown of Houston, TX. Nick Gaitan is currently on tour with Rock n’ Roll singer Nikki Hill.Enjoy Cottonwood's Steak Night every Tuesday!Cottonwood Houston is our host for the music series. With drinks and food at your beck and call, along with their Tuesday steak night, Cottonwood makes it easy to relax and enjoy a great meal, drinks, and of course The Best happy hour music series this side of the Mason Dixion Line!! Just saying... Both Kid and dog friendly, Cottonwood makes this event a family-like environment. KPFT 90.1 FM and The Lone Star Juebox promotes and introduces you to upcoming acts and will play exerpts of the Troubadour Tuesdays broadcast the following Saturday - Tune in Y'all.Don't forget to tune in to The Lone Star Jukebox with your host Rick Heysquierdo every Saturday morning from 9 am 'til Noon on KPFT 90.1 fm for updates, details and of course the best in Americana music.