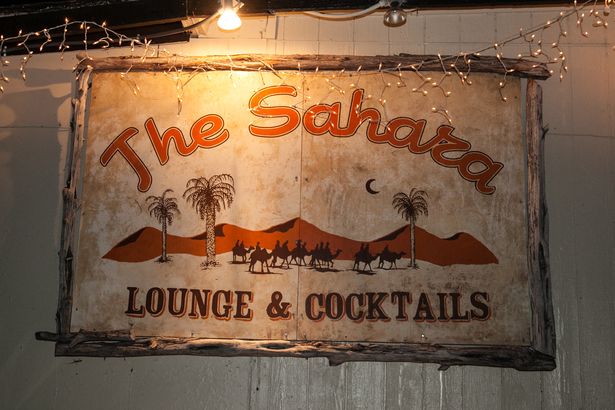 Our Story - In the News

While The Sahara Lounge has only been open since July 2011, the historic building at 1413 Webberville Rd. has a long tradition of housing popular Austin night clubs and restaurants. In 1962 Thomas Plummer opened "Lincoln Drive-in" in the thriving "Lincoln Gardens" neighborhood. In the late 60's it became "RC's" and in 1978 "TC Lounge".

During his 33 years of operation, Thomas Perkins kept the music and good times happening. Austin music lovers, young and old, gravitated to the funky blues bar with a dirt parking lot. As soon as you walked in the door you could feel the history.

Monday night was "Blues Night", drawing a large crowd, including many UT students.

Who are the new owners and what is their vision for the club?

The new owners are a family - Ibrahim Aminou, Eileen Bristol and Topaz McGarrigle. Each individual is a dedicated musician.

Topaz, a native Austinite, is well known around Austin for his vocals and tenor sax, harmonica and guitar performing in "Mudphonic", "Hellfire Social" and "Golden Dawn Arkestra" as well as other local Austin acts. His musical career was launched when he was a young teenager, playing for tips on 6th St. and included a 10 year stint in NYC.

Ibrahim, who is originally from Niger in West Africa, plays percussion, guitar and traditional African instruments including Kora (African harp) and Gyil (African xylophone). He leads a local African band "Zoumountchi" which performs every Saturday at the Sahara Lounge "Africa Night" and also plays in the "Golden Dawn Arkestra", "African Fola Groove" and "First Flight". He also teaches West African Drum and dance classes at the Carver Museum and UT Informal Classes and various schools. He also builds and sells instruments and provides music for weddings, children's parties  and other events.

Ibrahim's wife, Eileen Bristol plays electric bass and performs with "Zoumountchi" and "First Flight". Born in Houston where her parents operated "Bruce Bristol Motorcyles", she moved to Austin in 1969 and was one of the founders of the "Austin Waldorf School" in 1980. In the late 80's she worked at "Onion Creek Farm" a bio-dynamic/organic farm in Dripping Springs and then relocated first to Chapel Hill, NC and later Ann Arbor, MI where she started a massage therapy business "RelaxStation",  picked up the bass and formed a jazz funk ensemble "First Flight" before returning home to Texas.

All 3 share the vision of a club that provides a welcoming, comfortable community space … an escape from the intensity of downtown Austin that provides high quality musical entertainment and free parking!